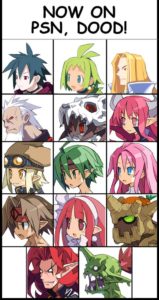 Nippon Ichi Software America, a North American distributor of localized game and anime titles have today announced that a brand new set of Avatars are now available for the Playstation Network for addition to your PSN Profile. These avatars cover two of their games – Disgaea 4 and their much prior release of Phantom Brave.

As the first four avatars for Phantom Brave, they have included four critical storyline characters – Marona, Ash, Raphael and Sprout. On the other hand, the Disgaea 4 set primarily focuses on different character classes and monster artwork in lieu of storyline characters. However, the human-world Vulcanus and Zetta (Makai Kingdom) do make an appearance in this set.

While I havent actually checked the price of these yet – usually avatars don’t cost any more than some spare change.