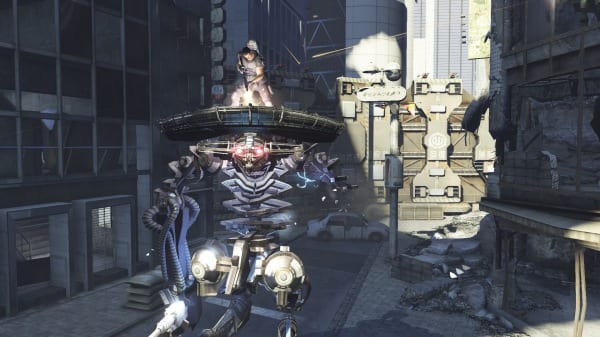 Binary Domain, a third person shooter developed by the same team that brought you the Yakuza games and published by Sega is set to receive a PC version. Sega Europe and Sega of America have announced that the PC version will be released via digital services on the 27th April 2012. Here is a brief official blurb on the game for those who are unfamiliar with it:

Binary Domain is a dynamic action-adventure, featuring a cast of striking characters battling through 2080 era Tokyo in an effort to cleanse mankind of a race of hybrid robot/humans known as ‘Hollow Children’. As they explore a country ravaged by climate change and social upheaval, Dan Marshall and his R.U.S.T. crew will have to fight through both the slums of the lower city and the pristine hi-tech environments of the upper city. The R.U.S.T. Crew’s varied arsenal of tactics and weaponry will be necessary in order to emerge victorious in thrilling boss encounters, while Binary Domain’s procedural damage system allows players to shred their robotic foes limb-by-limb in high-intensity fire fights.

Pre-order bonuses are available for the digital version. The ‘Dan Marshall Pack’ focuses on Binary Domain’s playable protagonist of the same name, and features additional bionic upgrades and weaponry. The ‘Multiplayer Pack’ adds the ‘Ninja’ playable class, a unique character type with a focus on surprise attacks and adaptive combat and finally the new ‘Outside High-rise, Upper City’ map and additional weapon types round out Binary Domain’s multiplayer experience. Check with the outlet to confirm they have these packs available.

I reviewed the game’s console release last month, for which it received a solid score of B+. You can read my review of the game HERE.