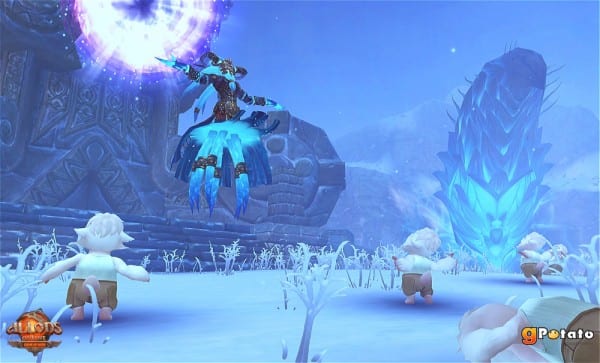 GPotato today announced that the biggest expansion to ever hit their MMORPG release of Allods Online is going or has already gone live as you read this. The expansion pack entitled Allods Online: Game of Gods features a number of brand new zones, content and systems including a brand new Bard archetype, new PvP Skirmish Zone and a new end-game Dead City raid.

Game of Gods brings over a year’s worth of content to the rich world of this blockbuster MMORPG. Explorers have discovered the fourth layer of Astral Space, a zone guarded by giant demons and populated with 15 unique allods, and stumbled upon the long lost Dead City raid with its 10 legendary bosses. The battle for control of this expanding world has grown even more intense, with bands of 12 meeting regularly in Witch’s Hollow to compete in PvP territory wars called Skirmishes.

Even familiar places now have more to offer with the completion of the long-awaited Nezebgrad Beautification Project, enriching the industrial city with more of Allods Online’s famously lavish world design. Lovers of beauty will also enjoy kicking back in the gorgeous new Tropical Allod with its butterfly hunts, cocktail mixes, and competitive crab races. The warriors of Sarnaut can even indulge in a bit of karaoke, though the newly introduced support-class Bard archetype may be better-suited than most!

Allods Online: Game of Gods also introduces the brand new Currency Exchange system which opens up the game experience by allowing players to trade in-game gold for gem shards (boutique coins in Europe). These can be used to customize the decorations for Astral ships, alter a character’s appearance in the Hall of Changes, or test the odds at the new Prophetic Cards lottery.

Of course, this expansion cannot go without a few little events am I right? North America welcomes players

For those in North America, they welcome players to the new expansion with an ongoing log-in event that awards prizes for each day logged in through February 21 as well as a double EXP event that will last until February 28. Players have also been invited to welcome the new Bard class by showing off their own songwriting skills in exchange for prizes and the chance to have their song performed by a member of the Allods team. While on the other hand,  Europe ushers in Volume 5 with a competition for players gunning to make the all-new Bard archetype a key character in their Allods Online account. The first player on each server to reach end game with a Bard will win fabulous prizes. Allods Online Pimp My Build also returns with today’s launch, offering everyone a chance to win more prizes by showing off their favorite character archetype builds.