For the past few years, the Queensland Performing Arts Centre (QPAC) have included a number of “International Series” events as part of its annual calendar. Previous years have seen them host the Bolshoi Ballet (2013) and American Ballet Theatre (2014). In an announcement made earlier this week, QPAC have announced they will be providing an Australian exclusive season from France’s Ballet Preljocaj.

For those who have been closely following the Lyric Theatre Calendar, you might have noticed that there is currently a gap between We Will Rock You and Singin’ in the Rain. Filling in this gap will be the Ballet Preljocaj production of Snow White, which will be held from September 2nd 2016 until September 11th 2016.

Tickets to see Snow White are currently not on sale to the general public, but will be as of April 15 2016 at 9am. Seats will set you back $69 – $149, with price dependant on seating preference and concession status. The show is currently slated to run for 1 hour and 50 minutes (no interval). 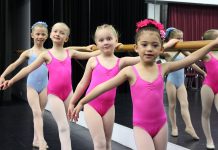