As you would have read on my earlier post: ‘Currently Announced Line-Up for the Capitol Theatre and Sydney Lyric Theatre [As of Early-April 2016]‘, ticket sales for the upcoming Australian production of The Graduate were recently discontinued. While no specifics of why were announced, venues including the Sydney Lyric Theatre and Queensland Performing Arts Centre (QPAC) claimed they were waiting for further clarification from the producers.

Unfortunately the news isn’t positive. It has now been confirmed that the production will no longer be going ahead, and that all Australian performances in the season have been cancelled.

Although this process may be slightly different between venues, QPAC listed the following on their website in terms of refunds:

For patrons who purchased ticket(s) using credit card via QPAC, you will receive a refund of the full purchase price within ten (10) business days.

For patrons who purchased ticket(s) using cash, Paypal or EFTPOS, please call qtix Box Office on 136 246 to receive a refund of the full purchase price.

For those who booked tickets at the Sydney Lyric Theatre, THIS LINK will provide you with all the information you will need. 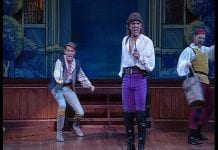