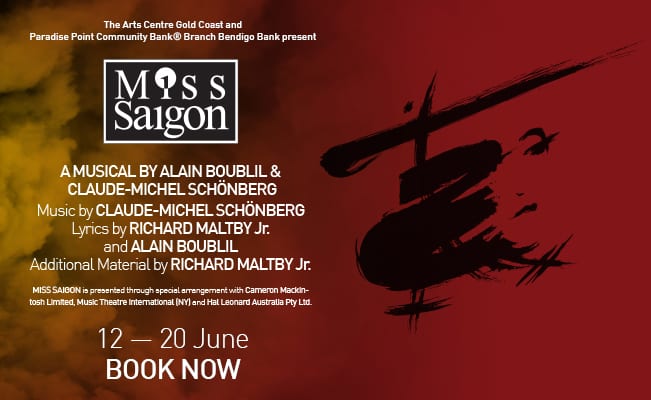 Following the post I made earlier this morning, The Arts Centre Gold Coast have just held their final show and curtain call for Miss Saigon, their in-house production of the acclaimed musical by Alain Boublil and Claude-Michel Schonberg (Both of Les Miserables acclaim). Unfortunately the venue have not announced any additional sessions, so it seems like those who have missed this season may have to wait for another nearby production sometime in the future.

Those who like myself were able to attend the opening night on 12 June 2015 can relieve parts of the evening with a recently released Opening Night video, available at the bottom of this post. The venue also had a behind-the-scenes video rolling on screens across the centre, and it would be interesting to see them post this up as well at some point.

I reviewed Miss Saigon on Sunday 14 June 2015, giving it a strong score of 4½ stars out of five. My comments included that “The Arts Centre Gold Coast have shown they can put on a stage musical which can rival those that travel across Australia” and that “the mostly Queensland-based cast represent their character roles with enthusiasm and skill“. It is a shame however that we could be waiting another year for their next in-house production.

While it may no longer be on in Saigon, you can check out what other events the venue are running via their official website.

A Look at the Colourful Worlds of Sonic Colours: Ultimate