Ever wanted to travel the stars in the spaceship equivalent of a luxury cruiseliner? The latest flyable offering from Origin Jumpworks in Star Citizen, the 890 Jump, is a very pricey yet equal equivalent for that desire. Following on from its little brother the 600i which I covered in this photography series yesterday the 890 Jump (currently) features a much better-designed interior, a lot more space to move around in and the amenities to make this more of a flying hotel than a means of personal transport. Even though tourism mechanics have yet to be introduced in Star Citizen, it is still a nice ship to fly around in if you get the chance.

While I don’t own the 890 Jump myself given its IRL pricetag, the current PTU version of Star Citizen Alpha 3.8.1 not only introduced the ability to (finally) remove the game’s film grain effect but also grants participants access to what is essentially a Free Fly period for every ship currently flyable in-game. Therefore, I took this opportunity to fly around in the 890 Jump and take some snaps of a ship I love, but will probably never own.

In development by Cloud Imperium Games and their studios across North America and Europe, Star Citizen is being helmed by Wing Commander (1990s) creator Chris Roberts. The game has currently been in a long-term alpha phase with no confirmed release date. Despite this, the studio has raised more than $250 million USD through on-going crowdfunding. Star Citizen: A Tour of the Brentworth Care Center Star Citizen: A Tour of the Orison General Hospital 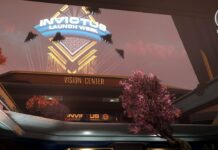