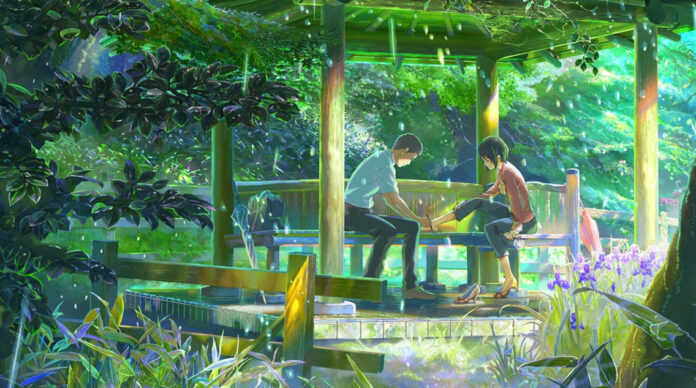 Premiered at the annual Gold Coast Film Festival, the short animated feature film The Garden of Words (Kotonoha no Niwa – 言の葉の庭) highlighted the visual creativity of both director Makoto Shinkai and the animation studio CoMix Wave Films. While it was let down a little bit by a haphazard narrative which deserved at least double its original runtime of just under 50 minutes, it was nevertheless another great production.

With many years having passed since its original release, in a few short weeks, Yen Press will be publishing the previous Japan-exclusive novelisation of the film localised into English. This joins previous novelisations and manga adaptations of Shinkai’s later works, including Weathering With You and Your Name.

In a couple of weeks, you'll have a beautiful new book to add to your Makoto Shinkai collection. pic.twitter.com/5QWlUsJYmB

About The Garden of Words

On rainy mornings, Takao can never bring him-self to go to school-instead, he spends that time at the beautiful Shinjuku Gyoen gardens and finds a brief reprieve from everything else in his life among the trees and flowers. And on one of those mornings, he discovers a mysterious woman named Yukino in his haven, skipping work, and  an unlikely friendship blooms between them. But though these two are the center of this story, they are far from the only ones trying to find their way in life.

From director Makoto Shinkai comes a deeper look at his award winning 2013 film, The Garden of Words, full of additional scenes and perspectives to show a whole new side of the many characters who brought the film to life.

Want to start off your year with some new artwork in the works? From...
Previous articleFall Guys: Ultimate Knockout
Next articleDendy Cinemas in Canberra and Sydney to Host Anime Festival Over Coming Weeks
Twitter Youtube
© The Otaku's Study
Go to mobile version