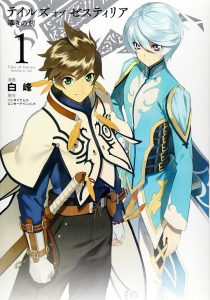 You have played the game… soon it will be time to read its manga adaptation.

Continuing to go through their sizable list of recent acquisitions, US-based manga publisher Seven Seas Entertainment have confirmed they hold the rights to Tales of Zesteria’s manga adaptation. This is a manga series written and drawn by Shiramine, which hopes to encapsulate “all the adventure, magic, and character relationships of its source material that makes the story such a treasure to its fans”.

Like other acquisitions from Seven Seas Entertainment in recent days, expect to wait a fair few months for a release. Tales of Zesteria will be available as single-volume editions, with Volume 1 set to be available on June 13 2017, priced at $12.99 USD or $14.99 CAN.

About Tales of Zestiria

Sorey is a human boy who has lived all his life in The Divine Forest, side-by-side with heavenly, but secretive creatures known as Seraphim, which includes his best friend Mikleo. While investigating the old ruins near their home for Seraphim lore, they meet a young woman named Alisha, a knight seeking answers to the calamities drawing their world to ruin. Upon learning that the Seraphim may have a connection to the destruction, Sorey decides it’s time to leave The Divine Forest. With Mikleo and Alisha at his side, Sorey will seek out the truth behind the catastrophes—and discover his own hidden powers in the process.