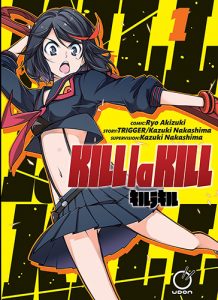 Especially when compared against regular novels, there are very few volumes of manga which receive a hardcopy release.

Seeking to offer something a little bit different from their usual manga releases, Udon Entertainment have announced they will be offering three hardcopy volumes of Ryō Akizuki’s Kill la Kill manga series, with each covering one of the three volumes. This follows an initial softcover release, and will only have limited stock printed.

Welcome to Honnouji Academy, a school ruled under the iron fist of the Student Council President and her underlings, the Elite Four. Bestowed with incredible powers from their special Goku Uniforms, only one person dares to stand against them – transfer student Ryuki Matoi! Wielding her fabric-slicing Scissor Blade, Ryuki aims to bring Honnouji Academy’s fascist overlords to their knees!

With a new (hopefully better) year ahead of us, it also means that fans of manga and light novels have waves of new publications...
Read more
Artbooks