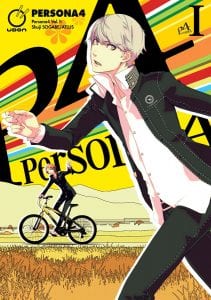 Providing another means for fans to enjoy the story of Persona 4, Udon Entertainment have confirmed they have acquired the rights to the game’s official manga adaptation.

Based on the original PlayStation 2 game (Not the Golden remake) and created by Shuji Sogabe and ATLUS, this manga series will begin arriving in select retailers from September 2015. Future volumes are planned for release bi-monthly through to the end of 2015 and into 2016. Each volume will cost approximately US$ 13.99, and will be softcover books.

Currently this announcement only covers Persona 4, with no word on if Udon Entertainment ever plan to acquire the rights to any other Persona manga adaptations.

I’ve played the Persona 4 games and I’ve seen the anime from beginning to end, and yet the manga has still offered me a fresh, new perspective on this fantastic story. It’s an experience that the games and anime can’t quite replicate, thanks to manga’s uniqueness as a storytelling medium.

When the small rural town of Inaba suddenly becomes the scene of a series of grisly murders, an eclectic group of high school students forms an investigation team to uncover the truth behind them and prevent more deaths. But when they discover that the murders might be connected to an urban legend about a paranormal television phenomenon called the “Midnight Channel,” a simple investigation turns into a dangerous, action-packed journey of self-discovery across two different worlds. Along the way, dark truths will shake our heroes to their very core – and help them discover an inner strength they never knew they had!