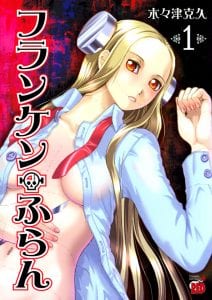 North American manga publisher Seven Seas Entertainment have announced they now hold the rights to Katsuhisa Kigitsu’s dark parody manga series, Franken Fran. While the rights have been acquired, don’t expect a release for more than half a year yet, with Seven Sea’s first omnibus (two volumes in one) release set to hit store shelves starting February 16 2016 for $19.99 USD.

Seven Seas publisher Jason DeAngelis has commented that Franken Fran was one of their “most requested licenses of all time”. “We already have such a passionate fanbase for monster girls—like for our bestselling series, Monster Musume—so Franken Fran is a great fit. It really pushes the envelope as both a horror and comedy” concluded DeAngelis.

Somewhere, out in the sticks of rural Japan, there is a mysterious manor that is home to the greatest surgeon who ever lived. But when the surgeon goes missing, his reanimated daughter, Fran, takes up the family profession, and despite her Frankenstein-like ways, cares deeply for her patients and holds steadfast to the Hippocratic Oath. Fran’s creed? “All lives must be saved, no matter the cost!” Readers will join Fran, her twisted sister Veronica, and the rest of her monstrous entourage in a gruesomely hilarious tale that would put Mary Shelley to shame! Because for Franken Fran, the ends always justify the means, no matter what ungodly creations emerge from her lab.