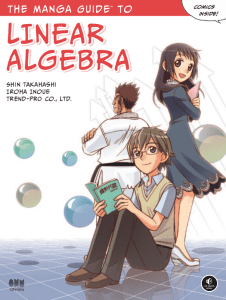 Reiji wants two things in life: a black belt in karate and Misa, the girl of his dreams. Luckily, Misa’s big brother is the captain of the university karate club and is ready to strike a deal: Reiji can join the club if he tutors Misa in linear algebra.

Follow along in The Manga Guide to Linear Algebra as Reiji takes Misa from the absolute basics of this tricky subject through mind-bending operations like performing linear transformations, calculating determinants, and finding eigenvectors and eigenvalues. With memorable examples like miniature golf games and karate tournaments, Reiji transforms abstract concepts into something concrete, understandable, and even fun.

Over the last couple of years, No Starch Press have been releasing a number of books in “The Manga Guide to” series, a set of manga based around some sort of educational focus from either mathematics or science fields. I have previously covered one of their earlier releases “The Manga Guide to Biochemistry” (Which received an A Grade) and have since read two of their other books “The Manga Guide to Molecular Biology” and “The Manga Guide to Electricity”. Two of those fields I have reasonable knowledge of having covered them in my undergraduate and/or Masters degree while the third was one I had some idea about with it having been a focus on the one semester of Physics I did in High School. But with their latest release they are tackling mathematics, more specifically Linear Algebra – an area I myself have not touched since I graduated High School but one I was curious to seem them implement into a book.

In this book you receive a “crash course” in linear algebra featuring such “fun” topics as Basic Vector and Matrix Operations, “Linear Dependance, Independance and Bases” and Gaussian Elimitation to name a few. To an ordinary student these topics may not be very exciting in any shape or form, but lets pose this in another light. Would you rather learn from a textbook that could be substituted for a brick (My maths textbooks could have been…) or would you rather learn from a smaller more casual book that merges all of these with practical applications and an oddly comical plotline to go alongside it. The comic book may no longer be an enemy of teachers anymore, with this series providing an interesting way to study. Of course, the resources that one most effectively uses to study differs between person to person, but being what I would consider a more practical learner myself…. how did this release actually shape up? 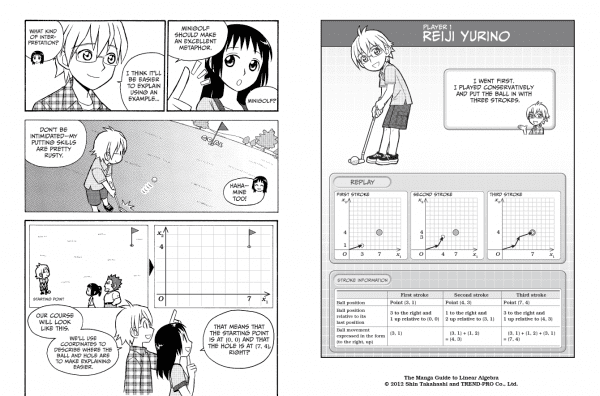 While I don’t think it met the quality of other releases which would have had a bit more leeway in terms of topic matter and storyline, I was more than happy with the topic and what was provided.  Unlike previous installments I have read where the storyline follows a problem student (or moe girl from the land of electricity) this release follows a High School student by the name of Reiji who despite writing his own textbook wants to join the schools karate team. The leader of this team provides him the opportunity to join on the proviso that he tutors his sister Misa in Linear Algebra – which she knows very little about. Through this a relationship blooms while Reiji suffers at the hands of the karate team and yada-yada-yada. The book is split up into eight separate chapters, each of which focus on a key element of linear algebra from the basics to more advanced topics. The chapters are listed below so you can get an idea of just what is on offer:

The storyline is not the dominant factor in the writing but instead of detracting from studying, helps facilitate it by guiding you through with practical and visual examples of the concepts being explained. For example when describing “implications” they will have the characters in a cafeteria and will use visual cues of food to show that “If this dish on the menu is a schnitzel then it always contains pork” may be true but “If this dish contains pork then it is a schnitzel”  is not always true and as another example, using a group of people in the cafeteria to display different algebraic functions. It certainly is not a storyline you would read for fun but for the purpose the book has been developed for it works quite well.

While the book does not contain much in the way of Questions and Answers, which you would need to consult a proper mathematics textbook or your teacher/lecturer for, at the end of most chapters they provide several pages recapping mathematical theories used within the chapter in more detail and/or provide several examples of their use in theory. Of course as this is a smaller book it is not a complete compendium on what you would expect to find in a textbook purpose-published for use within classrooms, I think it targets the core concepts needed for the topic and if I were to choose between this and a textbook – I would most probably go for this.

Once again I will admit the design and print quality of this release are of a great quality. Iroha Inoue did a brilliant job at designing the characters and environments which complemented the storyline and topic well and while not being anything extravagant was consistent , was used effectively to highlight parts of importance and gave a bit more life to the storyline through the character emotions. The book is published in Western Comic Book style which given the function of this book was an obvious choice and in the translation didn’t seem to lose any quality or accuracy in formulas.

As I wrote in my review of The Manga Guide to Biochemistry, it was very hard to pick any areas of concern within this release, however while the manga format does a good job at enabling more practical learners to remember the key concepts over reading them out of a normal book or study notes, I would have liked to see more means of memorizing the concepts such as through mnemonics. While no student can rely on these completely to understand Linear Algebra, the odd mnemonic can be well used during a “brain freeze” to get one back on track or memorizing something which is difficult to memorize in a short period of time.

Overall, Shin Takahashi, Iroha Inoue, Trend-Pro and of course No Starch Press have released another brilliant release in the “Manga Guide” series and I believe this book is something quite a few students will find useful in their study arsenal and a perfect complement to study notes and other available resources. That being said, if you are not studying Linear Algebra or have no interest in the subject then this will most probably not be the book for you – but I would highly encourage you to consider No Starch Press’ other titles in the series which cover a range of fields from Biochemistry to Physics to Calculus and Databases. While I most probably won’t require this for my future studies, I was more than pleased with this release and think the score I am giving sums everything up nicely….

Comic Books: Once an enemy of study, now potentially its best friend!
Final Score: A-