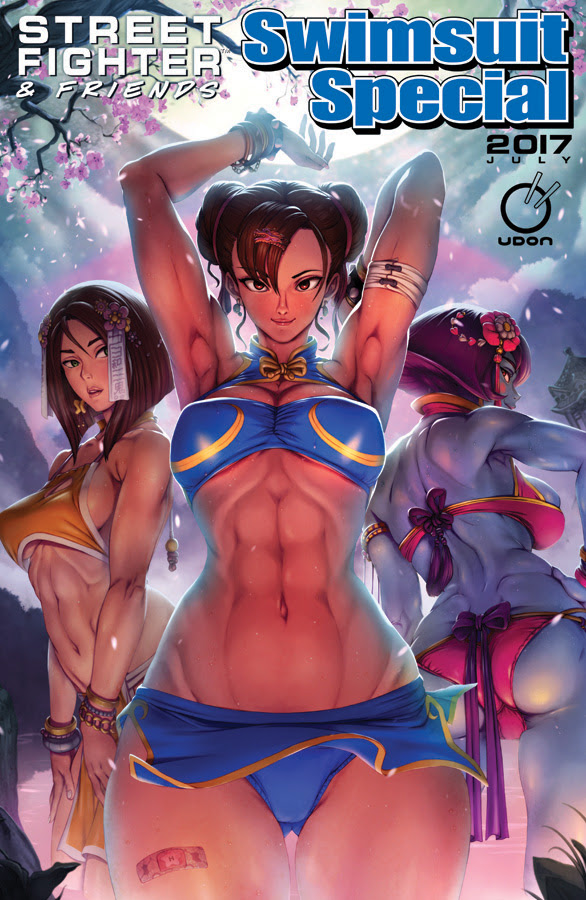 Bringing together characters from Street Fighter, Darkstalkers, Rival Schools and Final Fight – Udon Entertainment have announced they will be offering Street Fighter & Friends 2017 Swimsuit Special as a 32-page full-colour book from July 27 2017.

As its title already implies, this book will feature plenty of artwork surrounding the characters of Street Fighter and more in swimwear. Series featured in this book include Street Fighter, Darkstalkers, Rival Schools and Final Fight – and will see characters including Chun-Li, Cammy, Laura, Morrigan, Tiffany, Poison and more appear in summer pinups from many artists.

Street Fighter & Friends 2017 Swimsuit Special will have a range of covers. There are three standard covers featuring artwork by Ecchi-Star (CVR A), Aki Li (CVR B) and Ryan Kinnaird (CVR C). There is also a Blank Sketch cover (CVR D) and a retail incentive cover by artist Joe Vriens (CVR E). The latter cover features the swimsuit-clad Morrigan “paying homage to a classic horror image from the 1960s”.

Street Fighter & Friends 2017 Swimsuit Special will be available physically through comic stores, as well as digitally through ComiXology.