Udon Entertainment Continue to Detail the Evangelion Universe With Release of The Essential Evangelion Chronicle: Side B 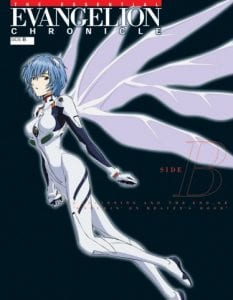 To celebrate the 20th Anniversary of Neon Genesis Evangelion, Udon Entertainment last year released The Essential Evangelion Chronicle: Side A. This book was released with the goal of “offering fans outside of Japan the chance to relive and study the series’ first 13 episodes in unprecedented detail like never before”. Continuing from there, Udon Entertainment have released The Essential Evangelion Chronicle: Side B.

The Essential Evangelion Chronicle: Side B follows up on last years book. It features an extensive episode guide which explores, deconstructs and shines new light on the latter 13 episodes of the original TV series plus the film The End of Evangelion. It also includes detail character profiles, character relationship charts, plot element summaries and a look at various Evangelion merchandise, including: action figures, model kits, apparel, and more.

This book is a softcover, full-colour release which totals 128 pages. It is currently priced at $39.99 USD, and is purchasable via select retail and online stores in print.