Grab Yourself Selected Hanabee 2014 Anime Releases at 15% Off 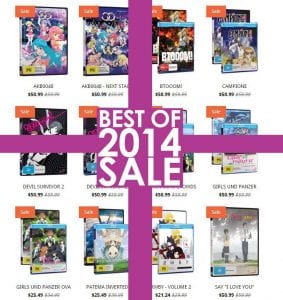 From Australian Anime Release of the Year 2014 Watamote and Surprise of the Year 2014 AKB0048, to other major titles including Gatchaman Crowds, Watamote, Girls Und Panzer and BTOOOM!; the 2014 anime release slate of Australian publisher Hanabee Entertainment included a number of notable titles.

Following on from a similar sale they held for selected 2013 titles the other week, Hanabee have confirmed a new sale for select titles they released on store shelves last year. Until Monday, chosen titles can be picked up at a discount of 15% via their online store.

Although this sale does not compare to the 20% off Blu-ray releases Hanabee were offering during Supanova: Pop Culture Expo, this 15% off sale covers both DVD and Blu-ray versions.