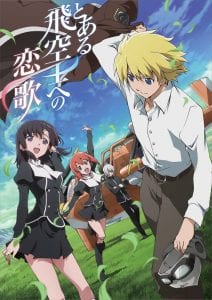 Delivering another one of their Japanese-dubbed / English-subtitled Premium Edition collections to the North American market, Nippon Ichi Software America have today confirmed that The Pilot’s Love Song (Aka. Toaru Hikuushi e no Koiuta | とある飛空士への恋歌) is now officially available for purchase.

This is a 13-episode anime series which will be available exclusively on the Blu-ray format. The anime adaptation is based on the original light novel works of Koroku Inumura, and features direction by Toshimasa Suzuki, composition by Shinichi Inozume and original character design by Haruyuki Morisawa.

The main voice cast include Natsuki Hanae as Kal-el Albus, Ayana Taketatsu as Ariel Albus, Aoi Yuki as Claire Cruz and Kaito Ishikawa as Ignacio Axis. A plot synopsis can be found at the bottom of this post.

With no Standard Edition available for purchase at this time, the only purchase option from NIS America is this Premium Edition set priced at $64.99 USD. For this price, you get all thirteen episodes across two blu-ray discs, a 64-page full-colour hardcover artbook, a hardcover artbox to store everything in and a handful of on-disc extras.

Kal-el Albus and his sister Ariel are preparing to attend the Flight Division of Cadaques Military High School, located on the floating island of Isla. Backed by the Balsteros Republic, the Kingdom of Qi, and the Benares Empire, the people aboard Isla will be embarking on a voyage to search for the fabled “End of the Sky.”

Over the course of this voyage, Kal-el forges new friendships with his fellow cadets and even falls in love with a young woman named Claire Cruz. But Kal-el has other reasons for being on Isla, for he is none other than Karl La Hire, the former crown prince of the Balsteros Empire who lost his family and title six years ago in the Wind Revolution led by the Wind Priestess, Nina Viento.

Knowing that Nina Viento is aboard Isla, Kal-el prepares to exact his revenge upon her, but a surprise attack by the fierce Sky Clan puts this plan on hold. Though Kal-el and his fellow cadets take to the skies to fight for love, the horrors of war start to take their toll as true identities are revealed, loyalties are tested, and the bonds of love and friendship begin to waver.

After airing in Japan back in 2018, US-based anime publisher Sentai has confirmed they will be delivering a home video release of brutal martial...
Read more