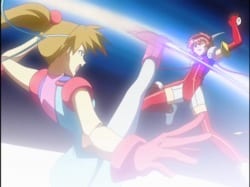 Following their recent announcement of anime titles including Angelic Layer and La Corda D’Oro: Blue Sky, North American anime publisher Sentai Filmworks have announced all the titles they plan to release on DVD and/or Blu-ray during November 2015. Many of these releases are available with Japanese dubbing only, although there are still three (Angelic Layer, Dramatical Murder and Gatchaman ~ The Movie) which provide the option to enjoy English dubbing.

A full list of Sentai Filmworks’ planned releases for November 2015 can be found below:

Toko Fukami thought she had settled on what she wanted in life: to hang out with her four best friends in their small seaside town, and to eventually become a professional glassblower working in her family’s glassworks.  But now two things have happened that may change her destiny forever.  First, she’s seeing things.  When she looks into reflections in glass, sometimes she catches glimpses of things that haven’t happened yet.  And then a new boy, Kakeru, transfers into town, claiming that a voice from the future led him to her.  Suddenly Toko is re-evaluating everything she thought she knew, from the proper care of her school’s chickens to how she really feels about each of her friends.  Get ready for an amazing summer that stands between the possibilities of the future and the memories of the past as six young people come of age in GLASSLIP.

Yoshitaka Nakabayashi may be young, rich, and not unattractive, but as runaway sisters Izumi and Mitsuki Sawatari quickly discover upon becoming Yoshitaka’s new maids, he has some SERIOUS issues.  Like his insistence on being called “Master,” and dressing the girls in costumes he creates himself.  Unfortunately, Izumi’s personal net worth is in the negative digits, and with Mitsuki and her pet alligator to support, she’ll just have to grin and bear whatever comes out of Yoshitaka’s twisted closet!  But the costumes are only the beginning, when Anna, a third au pair with obsessive issues of her own, joins the party, the situation will go from bad to perverse.  The rules of dealing with domestic help have never been so completely abused as when the madmen at Gainax (Evangelion, FLCL) unleash their most demented series ever: HE IS MY MASTER!

Studying at the Yamabuki Arts High School has been a dream-come-true for Yuno, and she’s learned so much already!  And not just from her instructors, but from her friends and neighbors who’ve become her second family and made the Hidamari Apartments such a safe and nurturing home.  But as the day of her “big sisters” Sae and Hiro’s graduation draws slowly closer, it’s time for Yuno to start seriously taking on the same role for Nazuna, Nori and the other budding young artists who’ve entered Hidamari’s protective cocoon.  And it’s also time to tackle some really challenging artistic assignments.  That doesn’t mean there won’t still be time for fun with Miyako and all the others, but it’s definitely time to pencil in her plans for the future.  And sometimes that means you have to put the art before the course!  Prepare to be drawn in once again as the magic that surrounds Hidamari continues in HIDAMARI SKETCH X HONEYCOMB – The COMPLETE COLLECTION!

Can you change who you are inside?  In middle school, Futaba’s shy nature and cute appearance attracted boys, but made other girls so jealous that she became a social outcast.  So, when high school began, Futaba remade herself, becoming sloppy and pretending to be unfeminine… and now she has friends!  But her new world comes crashing down when she runs into a boy she used to know:  Kou.  The one boy who could have become more than just a friend.  Except Kou’s changed as well.  So much so that she barely recognizes him.  And while the attraction that she used to feel seems to still be there in her heart, he doesn’t seem to feel the same way anymore.  Or does he?  Is the difference in the way Kou’s acting due to how different she’s ostensibly become?  Or have they both changed too much to ever recapture what they had? What goes around, comes around, as two young people rediscover each other and their own true selves in BLUE SPRING RIDE.

For years Kanade Kohinata has been considered a musical prodigy, but in her sophomore year of high school, the young violinist has found herself adrift and unable to regain her creative focus.  All that changes, however, when childhood friend Ritsu Kisaragi insists that Kanade and his younger brother Kyouya, also a violinist, both transfer to the prestigious Seiso Academy, where Ritsu rules the orchestra club.  The introduction of two new violinists is certain to cause friction, however, as the super-competitive club is in contention for the National Championships, Kanade and Kyouya are going to find their skills pressed to the limit as they attempt to prove that they belong.  And amidst the fire of competition, Kanade may find herself kindling more than just a passion for music, as a dozen different young men may be competing for her heart as well!  Music and passion combine as a young woman rediscovers her muse in LA CORDA D’ORO ~ BLUE SKY!

The Earth is in peril and Mankind seems doomed!  Led by the sinister mutant Berg Katse, the international terrorist organization known as GALACTOR has launched its armies of henchmen and giant weapons of mass destruction against the entire planet.  But the forces of evil are about to meet their match!  Utilizing incredible fighting techniques, and with the mighty ship God Phoenix at their command, the Science Ninja Team stands ready to take the battle back to the bad guys and their evil alien overlords!  Join Ken the Eagle, Joe the Condor, Jun the Swan, Jinpei the Swallow, and Ryu the Owl, as these five costumed commandos join with their commander, Dr. Nambu, to save our world the old fashioned way:  one flying kick at a time!  It’s the ultimate in old school anime action as the classic that started it all returns in SCIENCE NINJA TEAM GATCHAMAN – THE MOVIE!

When Kotaro Satomi discovers an apartment for the ridiculously low rent of 5000 yen a month, he knows there must be a catch.  But it’s not until AFTER he’s moved in that he finds out that he’s not the only one laying claim to Room 106 at Corona House, starting with teenage girl ghost, Sanae, who’s currently haunting it!  Still not enough to break the lease?  Let’s add in a Magical Girl, Yurika, who wants to take control of the room in order to block its powers from evildoers, a luscious Subterranean bombshell, Kiriha, who needs the room to launch an invasion of our world, and a fiery space princess, Theiamillis, who… well, you get the idea.  Can a lone high school student on a limited budget withstand the combined forces of the supernatural, metaphysical, subterranean, and alien worlds?  Especially when they’re all also incredibly adorable?  To keep that incredible 5000 yen a month deal, he’s certainly going to try in INVADERS OF THE ROKUJYOMA!?

From the moment twelve-year-old Misaki Suzuhara first arrives in Tokyo to live with her aunt, she finds herself swept away by the amazing world of Angelic Layer – a fast-paced high-tech game where dolls called Angels are controlled by the thoughts of their operator or Deus.  Discovering that her new friends are as interested in Angelic Layer as she is, Misaki builds her own Angel, Hikaru, and begins competing in battles where will and determination count far more than size and strength.  The rivalry is going to be fierce and, with the national championships looming on the horizon, you can bet that not everyone Misaki meets will be on her side.  Can Misaki handle the pressure of non-stop competition while struggling to adapt to life in an unfamiliar city?  From the amazing minds and pens of Japan’s legendary all female creative team CLAMP, it’s the coming-of-age adventure that’s become an all-time anime classic – ANGELIC LAYER!

Nothing on Midorijima has been the same since the powerful Toue Konzern forced the original population into the Old Residential District and converted the rest of the island into the exclusive resort Platinum Jail.  Despite that, Aoba Seragaki has tried to build a normal life for himself, working part-time in a junk shop and hanging out with his friends and his A.I. “pet” AllMate, Ren.  But when Aoba is drawn into the shady underworld that surrounds the popular virtual game Rhyme, the universe that he thought he knew falls apart.  If déjà vu describes the sensation of experiencing something that you think you may have done before, what is it called when other people seem to recognize you for doing things that you don’t remember doing?  All Aoba knows is that there are gaps in his memory, people are disappearing, and a secret buried in his own mind may be the only keys to revelation in DRAMATICAL MURDER!