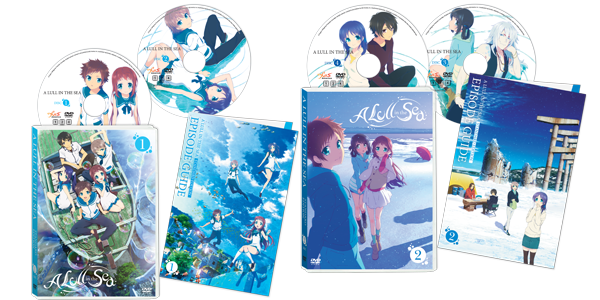 One of the major issues likely facing some with Nippon Ichi Software America’s Premium Edition set for A Lull in the Sea (Nagi no Asukara | 凪のあすから) was its cost, with a suggested retail price of $179.99 for a 26-episode season being higher when compared against most other English dubbed anime series on the market. Rather than keeping fans waiting months if not years for a standard edition set, the publisher have released two half-season DVD sets for those wanting to enjoy the series but are willing to forgo the artbox, Blu-ray discs and artbook.

A Lull in the Sea Standard Edition Volume 1 and Volume 2 each come with 13 episodes across two standard DVD’s. While there is no bonus physical goodies in each set, there are the usual assortment of extras including clean opening/ending sequences, a bonus Episode (Episode 14: The Promised Day – Volume 1) and more. Both sets also include the original Japanese dub in addition to a brand new English dub.

Much cheaper than the Premium Edition, both sets can be purchased for $49.99 USD each.

A Lull in the Sea – Official Synopsis

Long ago, humans lived in the sea. However, some humans defied the Sea God and moved to the land, creating the division that now exists between Shioshishio, the Sea Village, and Oshiooshi, the village of the land. Now, four middle school students from the Sea Village, Manaka Mukaido, Hikari Sakishima, Chisaki Hiradaira, and Kaname Isaki must attend Mihama Middle School on the land. While getting used to their new lives, these four and their new friend from the land, Tsumugu Kihara, learn how true bonds of love and friendship can overcome any separation.