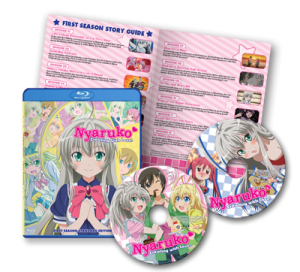 In the lead-up to them likely announcing a number of new acquisitions during their Anime Expo 2015 festivities next month, Nippon Ichi Software America have released three new Standard Edition sets for some of their older (premium edition exclusive) sets. These releases cover Nyaruko: Crawling with Love Season 1, WAGNARIA!!2 Complete Second Series and Yuruyuri Season 1.

Information on all three series, which have all been reviewed and covered on The Otaku’s Study previously, can be found below:

Mahiro Yasaka finds his quiet life thrown into chaos when he’s attacked one night by a fearsome demon. Luckily for Mahiro, Nyaruko, the Crawling Chaos, has been sent by the Planetary Defense Agency to protect him. It turns out all of the creatures from Lovecraft’s Cthulhu Mythos are in fact just aliens! Soon enough, Kuko, the Ravenous Chaos, and Hasuta, the Deity of Wind, have entwined themselves in Mahiro’s life as well. Follow Mahiro and gang as they fight for their lives, learn about love, discover intergalactic video games, and perhaps even save the world!

Right after starting middle school, Akari Akaza joins the Amusement club, whose only other members are her two childhood friends, Kyoko Toshino and Yui Funami. Chinatsu Yoshikawa, Akari’s classmate, becomes the fourth member after falling head over heels for Yui. The Amusement club meets at the abandoned tea ceremony room and has no clear purpose, leaving the girls to do whatever they want. More often than not, Kyoko stirs up some wild scheme to get