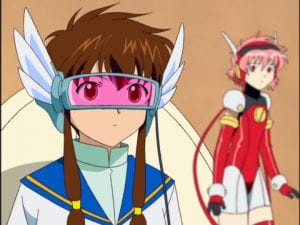 For quite a few anime series in the international market, once a publishers license expires and stock disappears off the shelf, it is plausible to never expect a license rescue. As seen with titles like Azumanga Daioh (Madman) and Ghost Stories (Discotek), there are occasions where license rescues are made however – usually for more mainstream titles.

Although this was not something I was expecting, it seems like Madman Entertainment have plans to re-release the complete series of Angelic Layer on DVD beginning August 5 2015. This follows their work on other CLAMP titles including Cardcaptor Sakura (Uncut), Cardcaptor Sakura: The Movie and Chobits. Like their original releases, this will come with dual-language (English/Japanese) audio.

Unless a date change arises, expect to be able to pre-order this title from next month.

Twelve-year-old Misaki, a middle school freshman now living with her aunt, quickly makes friends with others who are as interested in Angelic Layer as she is. Misaki builds her own Angel, Hikaru, and begins competing in battles where will and determination count for far more than size and strength. Will Misaki get the hang of Angelic Layer quickly enough to avoid defeat? Who is that mysterious man who keeps popping up, anyway?