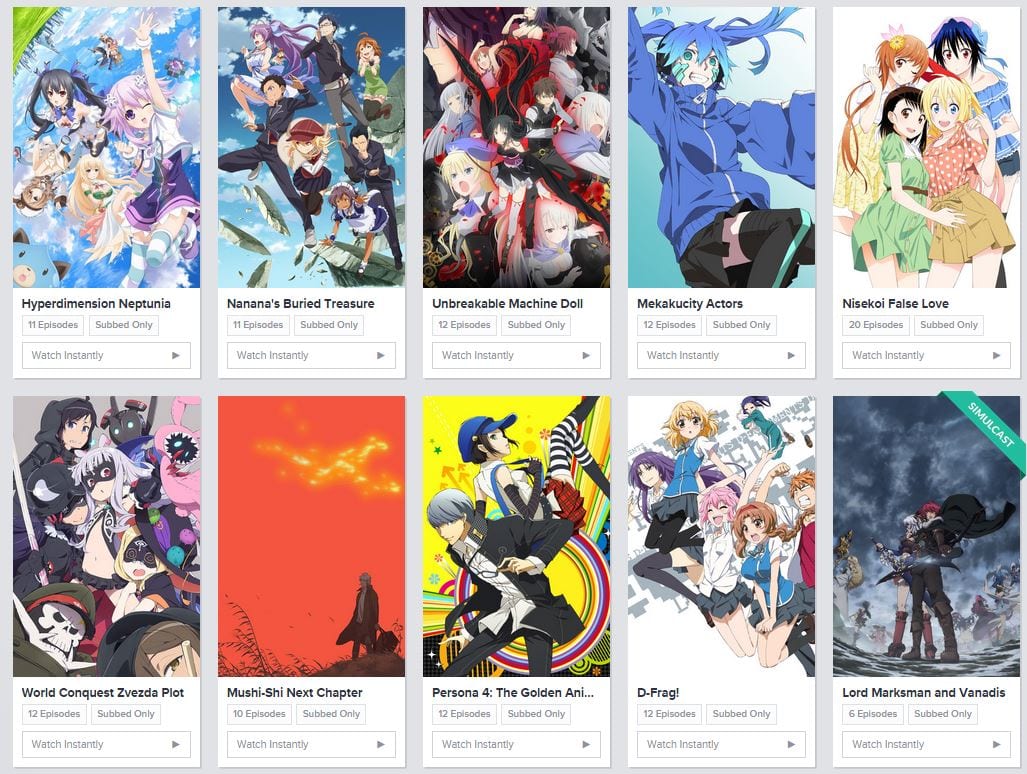 Do you have a free weekend and want to spend it doing nothing but watch anime? Madman Entertainment have over these past few days added thirteen brand new acquisitions to their video-on-demand website AnimeLab which should provide you with a plentiful supply of distinct series to watch.

The announced series are a mixed bag of full-season uploads and simulcasts, and are currently only available via the AnimeLab service. Home video release details are set to be confirmed for all thirteen at a later date.

A full list of series can be found below:

Psycho-Pass II
Inspector Akane Tsunemori and her comrades at the Criminal Investigation Department return for the mind-blowing continuation of this popular sci-fi series, set in a world where the justice system can read your mind – and justice is dispensed from the barrel of a gun. Pick the story following the dramatic conclusion to season one and see what happens to Akane after she learns the truth about the Sibyl System.

Sword Art Online II
A year has passed since the SAO incident. Kirito receives a strange request from Seijiro Kikuoka of the Ministry of Internal Affairs and Communications, Virtual Division. He has been researching the strange phenomenon of ‘Death Gun’, which has suddenly started occurring in the VRMMO game, Gun Gale Online (GGO). If a player is shot by the avatar possessing the black gun, they will die in real life. Kirito is unable to reject Seijiro’s request to log into GGO, despite his doubts over whether the virtual world can have a physical impact on reality.

Soul Eater NOT!
Soul Eater NOT! follows the lives of Tsugumi Harudori – a halberd demon weapon – and her friends as they learn the ropes of the DWMA (Death Weapon Meister Academy), a special institution for humans born with the power to turn into weapons, and the wielders of said weapons, who are called ‘meisters’. While the students of the EAT (Especially Advantaged Talent) class train themselves to become warriors of justice, the NOT (Normally Overcome Target) class is for those who just want to control their powers who takes part in the NOT class and befriends two meisters – Meme Tatane and Anya Hepburn – and becomes indecisive about which one of them to choose as her partner.

Lord Marksman and Vanadis
In a time of war, in a fantasy counterpart of Western Europe, Ellenora Viltaria – one of the Vanadis of Zhcted – leads the conflict into the Kingdom of Brune. There are seven ‘Vanadis’ in all, so named because they each received a powerful weapon from the Black Dragon and reign over seven individual territories. The power of the Vanadis causes dread and fear in their enemies. A young archer called Tigre, an Earl in the service of the country of Brune, got a taste of it after he was defeated on the battlefield by Ellenora. She decided to spare his life after witnessing his skills in battle, though in exchange, he is asked to serve her.

Unbreakable Machine Doll
In the mechanized city of Liverpool, a Japanese student and his beautiful female companion enter the most prestigious magic academy in the world—the place all puppeteers dream of going. There, students use automatons and living dolls to fight against each other in the quest to become the world’s best puppeteer.

Hyperdimension Neptunia The Animation
In the world of Gamindustri, four competing CPU goddesses rule the lands of Lastation, Leanbox, Lowee and Planeptune. When dark forces threaten their power, they’ll have to learn to work together if they want to defeat evil. Based on the hit RPG series, it’s the video game console wars as you’ve never seen them before: fought by gorgeous girls!

Persona 4 The Golden Animation
Spring. Far from the city, time flows peacefully in this rural town. As the cherry blossoms scatter in the wind, a young man named Yu Narukami steps off the train at Yasoinaba Station. Yu has come to this town, where his uncle lives, for family reasons; he will be transferring into the local school, Yasogami High. And so begins his school life… The shopping mall after school. A series of murders taking place in town. The Midnight Channel, airing late at night… What lies in store for Yu and his friends this time around?

D-Frag!
Kenji likes to think that he and his gang of friends are the bad boys of their school. That is, until he meets the four insane girls of a game-making club whose personalities are all super weird (and a little on the violent side). When Kenji’s forced to join their little group, his life quickly takes a turn for the outrageous.

Mekaku City Actors
The incidents which occurred on August 14th and 15th bring a group of young boys and girls together… They are members of a group they call themselves the “Mekakushi Dan” (Blindfold Organization) and each member possesses a strange power involving their eyes. Will the members of this peculiar organization be able to solve the mysteries behind these incidents and see the truth?

Nisekoi False Love
Raku Ichijo is an average high school student. He also happens to be the sole heir to the head of a Yakuza Family called the Shuei-gumi. 10 years ago, Raku made a promise… a secret promise with a girl he met. They promised one another that they will get married when they reunite. Since then, Raku never let go of the pendant the girl gave him.

World Conquest Zvezda Plot
What does it take to CONQUER THE WORLD?! Every leader of the past has thought of it… but all they have done was to merely dream of its greatness. World domination… nobody has been able to achieve it. Until one little girl by the name of Kate Hoshimiya came along. Kate Hoshimiya will shock the world! How was she was able to carry out such a MAGNIFICENT stunt? So FRIGHTFUL! So GLORIOUS! Could this be…the ZVEZDA PLOT?! Let the light of our great ZVEZDA shine upon this land far and wide!

Mushi-Shi: The Next Chapter
They are creatures only known as ‘Mushi,’ whose abilities range well into the supernatural. While their existence and appearances are unknown to the humans around them, there are a few like Ginko who is a ‘Mushi-shi’ that travels around to investigate and find out more about the ‘Mushi.’ During the course of his discovery and understanding, he helps those who are troubled by the Mushi themselves…

Nanana’s Buried Treasure
Jyugo Yama is a boy who was disowned by his father and forced to transfer to a high school on an artificial island. He begins to live by himself, only to discover his room is haunted by a ghost named Nanana Ryugajou. She was murdered ten years ago and cannot rest in peace until her killer is found. Before her death, Nanana collected things from all over the world and hid them on the island. Jyugo and Nanana set out to find these treasures and use their mysterious powers to find the culprit of the murder.