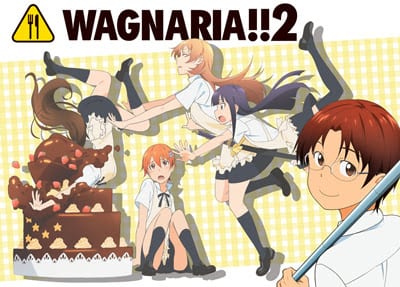 It has been several years since Nippon Ichi Software America broke into the anime market, with one of their first titles being Wagnaria!! (or Working!! as it was known in the Japanese market). With the second season now having well and truly aired within Japan, the publisher has today confirmed that its sequel Wagnaria!!2 is now available for purchase within North America as part of their Premium Edition release collection.

Priced at an MSRP of $64.99, this special collection comes with the usual hardcover artbox and 32-page hardcover artbook including content such as an episode guide, character information for new characters and several full colour illustrations. On-disc content however is mediocre, consisting of just two clean ending sequences. As with most of their recent releases, Wagnaria!!2 will only be available for the blu-ray format, with no confirmed plans for a DVD release.

Check out The Otaku’s Study in the coming weeks for a review of this anime title.