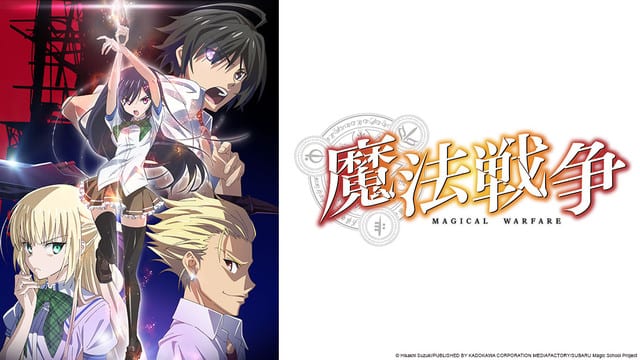 Online streaming service CrunchyRoll have confirmed that they will be adding Magical Warfare to their already sizable line-up of Winter 2014 anime titles. This series, adapted from the light novel series produced by Hisashi Suzuki / Lunalia will be available from the 9th January 2014 at 12:30PM. This series will feature animation by the studio Madhouse, who boast a sizable line-up of titles in their over forty year history on the market.

This stream will be slightly more limited than most, only available to Crunchyroll users in the United States, Canada, UK, Ireland, South Africa, Australia and New Zealand.

In this modern magic action story, Takeshi Nanase is an ordinary high school boy who has a somewhat dark past. Due to certain circumstances, he formed a “fake” couple with his childhood friend Kurumi Isoshima, but otherwise, he lives a normal life. However, one day, he comes across a girl named Mui Aiba, in a uniform he has never seen before, collapsed on the school campus. This encounters changes Takeshi’s destiny completely. Mui tells Takeshi that she is a magician, and she apologizes, for she turned Takeshi into a magician, too. What Takeshi once knew as one world is actually two — one world where magicians live and the other world where humans live.