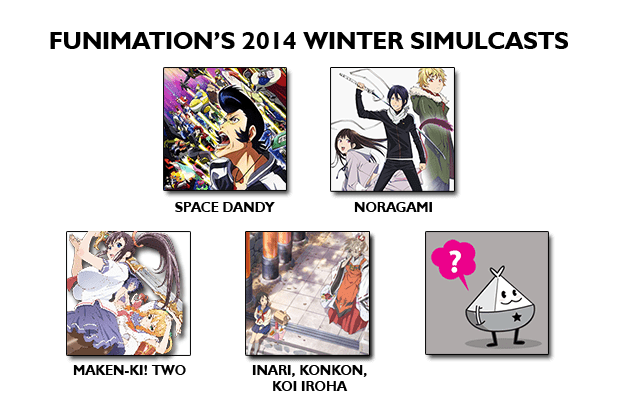 With the brunt of this seasons anime releases set to air in Japan next month, Funimation Entertainment have over the past few days been announcing the series that they now hold the simulcast rights to in North America – with a total of five up for grabs. With the fifth soon to be announced, we currently know four titles that will be available through their website next month. These are:

Inari is a cheerful girl with a crush on the coolest guy in school, but she can’t seem to confess her feelings to him. When a goddess blesses her with the ability to shapeshift—much to the chagrin to the spiritual world—can love bloom for the young girl?

The students of Tenbi Academy are back for round two! What trouble will Takeru get himself into for season 2? You’ll just have to watch to find out!

Yato may just be a minor god now, but he’s determined to make it big and he’s got a plan. Unfortunately, things just don’t seem to be going his way. He doesn’t have a single shrine dedicated to him, his partner has just quit, and now he’s got to find a new divine weapon. Just when things look bleak, he meets a girl named Hiyori and changes her life forever.

Space Dandy is a dandy guy in space! This dreamy adventurer with a to-die-for pompadour travels across the galaxy in search of aliens no one has ever laid eyes on. Each new species he discovers earns him a hefty reward, but this dandy has to be quick on his feet because it’s first come – first served! Accompanied by his sidekicks, a rundown robot named QT and Meow the cat-looking space alien, Dandy bravely explores unknown worlds inhabited by a variety aliens. Join the best dressed alien hunter in all of space and time as he embarks on an adventure that ends at the edge of the universe!