Aniplex of America Pick Up Rights to Anohana the Movie: The Flower We Saw That Day 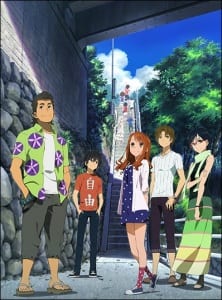 Last year saw Nippon Ichi Software America pick up the rights to and published anohana: The Flower We Saw That Day for DVD and Blu-ray formats. Personally I loved the film so much that it walked away with one of my few coveted S-Grade review scores and the title of North American Anime Release of the Year 2012.

But while it is NIS America that holds the rights to the TV series, it is Aniplex of America who have acquired the license to its film – set to hit cinemas in North America during January 2014. The film will be presented with English subtitles, and details on exact screening locations are not yet known.

Aniplex of America has also announced that those who attend the showings will receive an exclusive item called “Letters from Menma” featuring a replica of the letters which “Menma” wrote to her friends in the film along with some flower seeds the viewer can plant. These items will be available in limited quantity and will be available while supplies last.

Are your “friends” from back then, still your “friends” now? This is a story of one summer miracle. Due to a tragic accident during their childhood that took the life of one of their friends, 5 friends grew apart from one another. One summer day “Menma,” their friend who passed away, appears before them. She tells them that she must have a wish granted in order to pass on to the afterlife. But, she cannot remember what that wish is. The friends meet once more to figure out how to help “Menma.” Time that stood still begins to slowly move once more…Why did “Menma” come back?

I am very happy to be able to bring such a beautiful film to the fans in the U.S. So many people in Japan, not just anime fans, have loved this movie and cried because they were so moved. This movie succeeds in making its viewers remember something from their childhood and feel nostalgic. I think fans in the U.S. will need to bring a box of tissues with them when they come to the screenings.