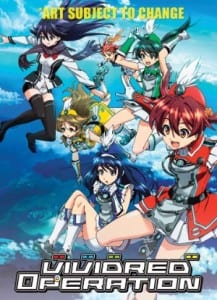 Instead of waiting for the availability of an English dub, Aniplex of America have confirmed their release plans for the anime series Vividred Operation in North America. The series will be available as a complete DVD set featuring the original Japanese dub and English subtitles as well as a selection of bonus on-disc and off-disc goodies. More importantly this release will be available just in time for Christmas with a December 17, 2013 release date set.

On an artificial island, Akane Isshiki, an innocent 14-year-old girl, lives a simple but happy life with her level-headed little sister Momo and their genius inventor grandfather. On clear days just over the water, everyone on the island can see the revolutionary invention that solved all the world’s energy problems, the Manifestation Engine. Thanks to the Manifestation Engine, the peaceful days that everyone had dreamed of had arrived. But suddenly, a mysterious enemy called the “Alone” appears out of nowhere aiming to attack the Manifestation Engine, jeopardizing their quiet way of life. Equipped with incredibly powerful Palette Suits designed by her grandfather, Akane and her friends must rise up together in this desperate situation. Their friendship is the only hope to save the world.