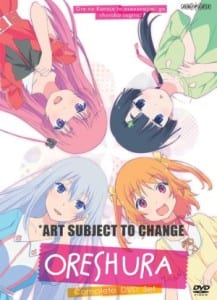 In addition to their announcement regarding Vividred Operation, Aniplex of America have also confirmed their plans to bring Oreshura to the North American market on DVD from the 17th December 2013. The release will include the 13-episode season alongside a number of physical and on-disc goodies at a suggested retail price of $74.98.

Eita Kidou is a high school freshman with excellent grades and a disdain for love. Along with his childhood friend Chiwa Harusaki, a girl who’s nearly a sister to him, Eita lived an ordinary school life concentrating on his studies. This was all until the school’s most beautiful girl, Masuzu Natsukawa, surprisingly confesses her love to Eita. However, her true desire is only to fool the eyes of others and pretend to be a couple. With a “certain secret” of his in Masuzu’s hands, Eita is forced to play along. Moreover, a fierce battle over Eita begins as his ex-girlfriend, Himeka, and his virtual fiancé, Ai, join the fray! Will Eita be able to continue his ordinary school life while maintaining a pretend relationship and dealing with all of his admirers?