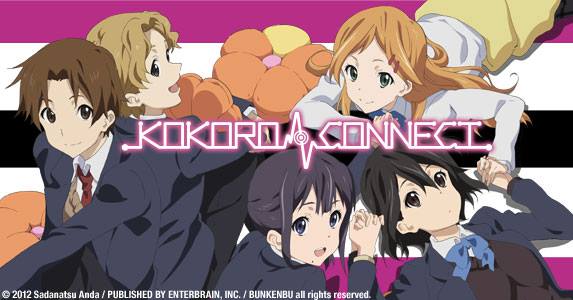 Following their recent “Guess the Voice Cast” content they held, North American anime publisher Sentai Filmworks have announced the English voice cast for Kokoro Connect, set for release in the region on the 22nd October 2013. Australian publisher Hanabee have confirmed that they will be publishing it in their region during December 2013.

The five members of the Student Cultural Society (or STUCS for short) that meets in class 401 have spent a lot of time wondering what it would be like to be in someone else’s shoes.  But they’re about to learn that there’s a huge  difference between thinking about something and  literally BEING in someone else’s shoes!  Because that’s exactly what happens when, suddenly and inexplicably, they each find themselves inside the body of the girl (or boy) next door!

What happens next?  Well, besides bringing a whole new meaning to the term “Exchange Student” and the expected freaked out runs to the bathroom, it’s not hard to do the math:  Take one wrestling geek, the resident cool girl, the class clown, the popular chick and one sultry girl of mystery, scramble thoroughly and divide, and you can bet that pretty soon they’ll be answering ALL of the questions they never wanted to know about the opposite sex in ways they never anticipated!  Get ready for the wildest game of musical bodies ever as Taichi, Himeko, Yoshifumi, Yui and Iori have to survive seeing the world through each others’ eyes in: KOKORO CONNECT!