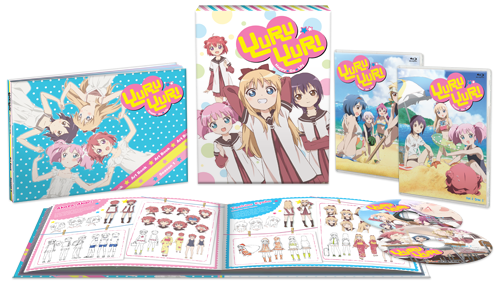 Nippon Ichi Software America, the North American publisher of video games and anime have announced that the first season of Yuruyuri is now available for purchase in North America as their usual premium edition release. This premium edition collection comes equipped with a hardcover slipcase, the first season over two blu-ray discs an a hardcover artbook with information and artwork from the series.

This series revolves around the “important” and hilarious discussions and adventures that Akari, Kyoko, Tui and Chinatsu face as the four sole members of the self-proclaimed middle-school amusement club.

Right after starting middle school, Akari Akaza joins the Amusement club, whose only other members are her two childhood friends, Kyoko Toshino and Yui Funami. Chinatsu Yoshikawa, Akari’s classmate, becomes the fourth member after falling head over heels for Yui. The Amusement club meets at the abandoned tea ceremony room and has no clear purpose, leaving the girls to do whatever they want. More often than not, Kyoko stirs up some wild scheme to get everyone in trouble, all as a means to pass the time and experience the ideal middle school life!