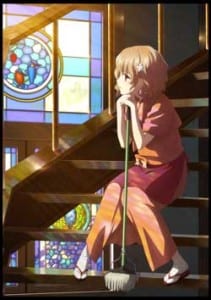 In their third and at this moment final anime announcement from Anime Expo 2013, Nippon Ichi Software America have confirmed their acquisition to the feature film Hanasaku Iroha: Home Sweet Home, which is set to build off the two-part anime series released by the company in the last couple of months. Release information on this title is currently unknown, but keep checking The Otaku’s Study for more news on this!

Overview of the Film

Ohana was living a normal high school life in Tokyo until her mother ran off and sent her to live with her grandmother, who owns a rural hot spring inn called Kissuiso. Thrust into a life where the customers always come first, Ohana struggles to find her place at the inn and fit in with her fellow coworkers. Yesterday, Ohana was an ordinary high school student. Today, she’s an attendant at a hot spring inn. As the days go by, she continues to grow her relationship not only with her fellow peers, but also with her estranged grandmother.

Ohana also has an unexpected visitor sent to train at Kissuiso – none other than Yuina,the heiress of the rivaling inn Fukuya. Even with this mischievous guest, Ohana still tries to maintain her cool. During this teamup, together they find something very interesting in the inn’s storage…