While you wait for more episodes of High School of the Dead, here’s a beach that is sure to be swarming with zombies soon

Filled with license rescues, new releases and a much anticipated KEY visual novel to anime adaptation, Sentai Filmworks have unveiled quite a promising November 2013 release slate for North America. For all the information on these titles divert your gaze below:

After battling dangerous creatures once existing only in legend, Princess Tamaki begins to deal with her uncertain future as the new Tamayori Princess.  Once she claims her rightful place as the protector of the universe, high school will seem like a breeze.  But whether she lives to accept that future is another matter altogether.  Her five guardians—handsome, powerful young men of great power and undeniable loyalty—have vowed to sacrifice everything to protect her.  But are any of them able to deal with a traitor in their midst?  And how can anyone deal with such important issues while still carrying a high GPA?  Sorcery and school conflict collide in the gorgeous and thrilling Hiiro no Kakera ~ The Tamayori Princess Saga!

Is insanity hereditary? Shougo Mikadono’s beginning to think so, because the terms of his late father’s will seem crazy and following them may drive Shougo bonkers as well.  Oh, it sounds simple at first: before Shougo can claim his VERY large inheritance, he just has to start attending a certain new school and find a nice girl to marry.  It’s a little unromantic, but perfectly do-able, right?  After all, all the girls seem quite friendly, so all Shougo has to do is find one he has something in common with. Except, and here’s the kicker, it turns out that Shougo has WAY too much in common with one of them, because she’s actually his long lost sister!  And he has no idea which one she is! Will Shougo meet and court his Miss Right without committing something very morally wrong?  Can he find his future bride without slipping into the wrong set of genes?  And if his little sister does reveal herself, just how much will be revealed and under what circumstances? Find out as family planning takes on a whole new meaning in NAKAIMO – My Little Sister is Among Them!

It’s one thing to wake up from a dream and be a little confused, but on his 16th birthday Tomokazu Mikuri wakes up WITH a dream, right next to the strange girl that he’d just been dreaming of!  Weirder yet, his hot older cousin, Nanase, takes the new addition to the household perfectly in stride and enrolls her in Tomokazu’s high school, despite the fact that the girl can only say one word: “Mone.”  But things get totally out of control when Tomokazu discovers that he can take others back and forth to Mone’s dream world, where his new found abilities may be the key to stopping a nightmarish invasion!  Faster than you can say “Harem Anime,” Tomokazu’s two worlds collide as girls from his “real” world join with those from the dream world to take on the evil forces of the Feydooms!  But can a 16-year-old nobody really lead a super hero team, stop the bad guys, save the world(s,) and/or get the girl(s) in the end?  It’s the kind of thing that only happens in dreams, but when the whole world’s a dream world, anything might be possible in YUMERIA!

In the early 21st century, the discovery of the first wormhole made faster than light travel possible.  However, what promised to be a gateway to the stars also proved to be a Pandora’s Box, and the process of jumping through space via parallel universes unleashed terrifying consequences.  Now, a quarter millennia later, the deep space outpost Watcher’s Nest must stand on guard, defending the vanguard of humanity against attacks by the monstrous Ghoul, who emerge from alternate time streams and turn their victims into the living undead horrors known as Necromancers.  For newly arriving cadets Misaki, Luxandra, Susanna and Kiri, it’s going to be an assignment in Hell as they train to become members of the elite Seraphim Squadron.  Because this is a war mankind has been losing, and a new, top secret plan to take the fight back to the Ghoul may end up costing them their minds, lives and even their humanity.  At the edge of known space, fighting an enemy from beyond time, the battle to keep the final frontier from becoming mankind’s final resting place has begun in DIVERGENCE EVE!

When tragedy struck Riki Naoe as a child, he was rescued from grief over his parent’s deaths when four other kids “recruited” him for their group – the “Little Busters.”  Now in high school, Riki and the other Busters are still fast friends, and though their vision of being heroes for justice may have faded, they’d still do anything for each other.  Which is why Riki is now on TWO special missions. The not so secret one: recruiting new members so the Busters can form a baseball team. Preferably FEMALE recruits, as the current dude/babe ratio is an inconvenient 4 to 1. The OTHER mission though, that’s the strange one. Because Riki and Rin, the group’s singular girl, are receiving odd messages, delivered by cats, concerning the existence of a “secret world” and assigning them tasks they have to complete.  Were their youthful dreams of being crusaders not so fanciful after all?  Or is there something even more vital at stake?  Between steeling his courage to talk to girls and dealing with his own narcolepsy, Riki may just need the strength of a superhero to solve the ultimate mystery of the LITTLE BUSTERS!

When an unplanned stop on a deserted island gives Takashi, Saeko and the rest of the ragged band of survivors a chance to expose themselves to something other than zombie bites for a change, they’re more than ready to take a break and let their hair down.  Discovering the remnants of an old beach store, the entire group strips to swimsuits and sets out to make the uninhabited island inhabitable, but they’re unaware that this seeming paradise is actually just the dead calm before the storm.  Because sometimes the recently deceased aren’t the only problems that can lie buried in the sand, and as the swimwear comes off and the inhibitions come down, a kink in the island’s food chain sets a truly shocking series of events into motion!  You won’t believe what comes out next, but suffice it to say that the deserted island may not be so deserted after all!  It’s an extra special H.O.T.D. that’s even hotter than usual as the naked and the dead come together like never before in HIGH SCHOOL OF THE DEAD – DRIFTERS OF THE DEAD!

Things are NOT going well for Felicitá. For years, the island of Regalo, has been protected by her father’s “organization,” the Arcana Tarocco, whose success is due in no small part to the members’ unusual skills with Tarot Cards, not to mention the more usual guns and knives. But now, unexpectedly, her father has decided to retire and, while the fact that his position will be filled by the winner of a series of duels doesn’t worry Felicitiá, the fact that he’s decided to throw HER into the contest as part of the prize certainly does.  Especially since some of the contestants are her cousins, which is keeping things in the family WAY too much!  Fortunately, our lady shark has two aces up her sleeve: as the head of the Swords Division, she’s eligible to compete for herself; and with her favored Card, The Lovers, she can snoop into the minds of her would be suitors cum rivals. It’s just too bad they have their own card tricks! Roll the Batchelorette, the Sopranos and that crazy gypsy from the fair into an insane anime calzone, half-bake thoroughly and you’ve got a lot of spicy mayhem ahead in LA STORIA DELLA ARCANA FAMIGLIA!

*Do note that while Sentai Filmworks have been promoting the Little Busters! release as a Complete Collection, from the information they provided it only seems to cover the first half (13 episodes) of the full season. 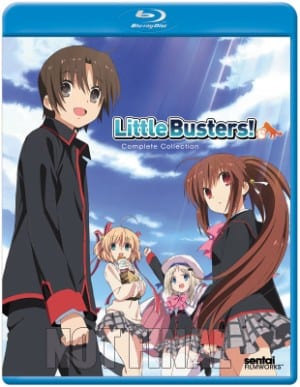 While Australian anime fans can log into the AnimeLab video-on-demand streaming service to get their daily anime fix, to some like myself, there is...
Read more
Anime

We may live in an era where anime fans can tune into streaming services such as AnimeLab and legally enjoy anime seasons previously only...
Read more
Anime