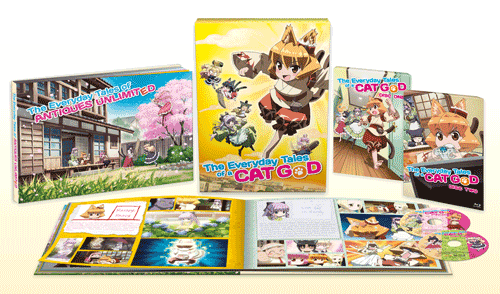 Since their initial releases of titles like Toradora and Wagnaria, NIS America have progressively been increasing their arsenal of anime titles to complement their set of video game localization’s / releases – setting themselves up as one of the powerhouses of the niche title market. Today saw their number of anime releases grow by one, with the release of another anime acquisition – Nekogami Yaoyorozu – which they have renamed and actually extended the title to The Everyday Tales of a Cat God.

As with all of their initial anime releases, this comes in the form of a Premium Edition only release, which features the entire 12 episode season plus the bonus episode alongside a number of extra goodies on and off disc. This release comes on blu-ray only and unfortunately for English dub fans, the companies stance on Japanese-dubbed only releases still stands. As this is a premium edition however, expect a slightly higher price at a MSRP of $64.99.

Mayu is a cat god, but she is no ordinary god. She has been cast down from the heavens and is now doomed to suffer on Earth…because she just could not stop getting into trouble! One day, she is taken in by the earnest and kind Yuzu, who owns an antiques shop called “Antiques Unlimited.” Yuzu quickly learns that Mayu’s godly level of laziness knows no bounds, as she would rather play video games than turn over a new leaf. The everyday tales of this cat god and her harrowing adventures to the candy shop, a landfill, a beach resort, and more show Mayu and her friends that sometimes, the simplest things in life are the best. There is also Gonta, who is obsessed with Yuzu, but Mayu wanted his role in this summary to be minimal. So there you have it.