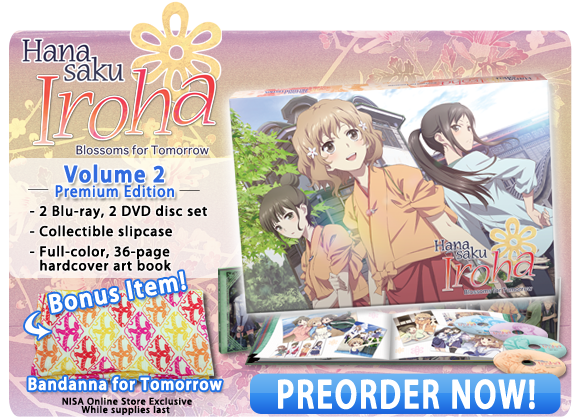 Right off the bat of their latest anime release “The Everyday Tales of a Cat God”, North American anime and video game publisher Nippon Ichi Software America have confirmed that their second volume of “Hanasaku Iroha ~ Blossoms for Tomorrow ~ is now available for pre-order.

Following on from the first set which launched a couple of months back, this second volume will once again be a half series volume comprised of 13 episodes dubbed in Japanese with English subtitles. As this is their premium edition release, this comes with not only the series on DVD and Blu-ray but a couple of extra goodies including a collectible slipcase (Note: These will look out of place on your bookshelf in comparison to normal DVD covers, but look better when you have several of them) and a 36-page hardcover artbook.

This edition is priced at $69.99, but currently listed as $55.99 on the NIS America store with a store-exclusive bonus “Bandanna for Tomorrow”. The series official listing has the title set for release on the 2nd July 2013.