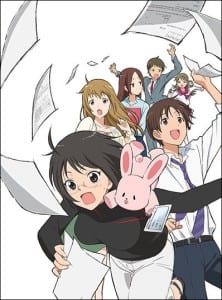 You may already recall the companies acquisition of Silver Spoon, but Aniplex of America have also recently confirmed their acquisition of the anime series Servant x Service, which in production by the studio at A-1 Pictures with direction by Yasutaka Yamamoto and writing by Taketo Shimoyama is set to begin airing next month in Japan. This is based on the comedy / slice-of-life manga series by the same name written and illustrated by Karino Takatsu.

This title will be streamed as part of the companies summer line-up however unlike Silver Spoon there is no word on any form of simulcasting planned. In addition to their plans for a digital release, Aniplex of America have also confirmed an eventual physical release which will be detailed at a later date.

In the Hokkaido Prefecture. In a certain city. In a certain government ward office.  Following a few strange circumstances, Lucy Yamagami has been assigned to work here where her colleagues all seem to be… on the eccentric side. A workplace comedy about how Lucy Yamagami, along with her colleagues, actively and covertly (?!) serve their community every day!

*This story has no connection to actual public officials.