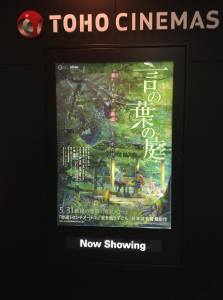 CoMix Wave Films have today announced that the latest film by legendary director Makoto Shinkai – The Garden of Words / Kotonoha no Niwa – is now showing at select cinemas within Japan. These screenings follow their world premiere of the film at this years Gold Coast Film Festival in Australia which was met with an overwhelming number of attendees and even required a doubled up signing sessions before and after the film.

There are currently no plans for any international screenings, with North American anime publisher Sentai Filmworks already planning the film for an August 2013 release on both DVD and Blu-ray. Australian anime publisher Madman Entertainment who have published other Makoto Shinkai works in the past have yet to confirm their acquisition of the film.

We have met, for each of us to walk forward.

From the acclaimed Japanese director of The Place Promised in Our Early Days, 5cm Per Second and Children Who Chase Lost Voices comes another dramatic animation piece set in the modern era about koi in the original “lonely sadness” meaning — of longing for someone.

Takao, a shoemaker in training, skips school to sketch shoes in a Japanese-style garden when he meets a mysterious older woman, Yukino. Then, without arrangement, the two start to see each other again and again, but only on rainy days. They deepen their relationship and open up to each other, but the end of the rainy season soon approaches…

I invite you to check out my review of the film HERE, and my interview with Makoto Shinkai himself before the event HERE.