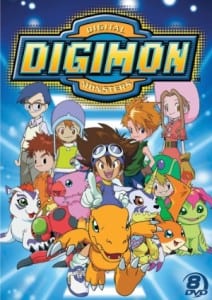 In August 2011, Madman Entertainment released the first season of the long-running Digimon anime series on DVD to the Australian audiences. This was one of the series first (If not the first) complete releases on DVD to the English market and there was wonder as to if anywhere else would be receiving such a release – given over the years demand has risen for series such as this.

Turns out that North America will only have to wait until the 9th October 2012, with North American distribution company New Video Group to release the complete first season of Digimon: Digital Monsters (Digimon Adventures). This set will contain all 54 episodes with only the English dub, alongside a 40+ page booklet featuring the original seven characters and an on-disc photo gallery with over 200 images and sketches.

Seven children from Japan are suddenly thrust into a strange dimension called the “Digital World” while they are at summer camp. During their adventure, Tai, Matt, Sora, Izzy, Mimi, Joe, and T.K. discover that they are in a land where digital creatures called Digimon dwell. Befriending seven Digimon, the children learn that they have the ability to help their partners digitally evolve (digivolve) into stronger, more powerful forms that can combat enemies for a short amount of time. Setting off on their journey, the children start searching for a way home.