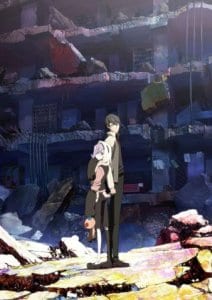 While Siren Visual approached their followers today with their acquisition announcement of the Black Rock Shooter anime series, the company also made another announcement which others may be pleased, indifferent or disappointed towards. Siren Visual’s release of noitaminA series UN-GO was slated for release this August as a subtitle only release, meaning there would only be the Japanese dub with English subtitles in the initial release. This has now changed and the release will be delayed for a couple of months, but instead will be released at this later date as a hybrid language release (Both Japanese and English dubs included).

While this may not be ideal for some, it will open the door to viewers of both preferences and will hopefully be an enjoyable release. For those who have pre-ordered and would like their money back, you can drop them an email and they will sort it out with you. This does mean you will forfeit poster privileges but it is an option to consider if necessary.

He pursues his job as the “Last Great Detective”. Others call him the “Defeated Detective”. What’s certain is that he’s Shinjurou Yuuki, a young man with a passion for mysteries and a talent for solving them that has made him the target of dark forces now stirring within the sinister underworld of a near future Tokyo. That could prove lethal, given that not even the other “good guys”, including the police, are exactly on Shinjouro’s side. Fortunately Yuuki’s not completely on his own, and with the aid of his uniquely talented associate Inga, he’s ready to cut a swath through the veils of secrecy that have been laid before him. Get ready for mind against matter and a lot of cloak and dagger as the ultimate battle of clue and deduction begins in UN-GO!