In attendance at Anime Expo 2017 with even more visual novel and video game acquisitions under their belt, Sekai Project used their industry panel at the event to confirm some of their new projects due in the latter half of 2017 and beyond. You can read more about each announcement below:

Deep beneath the crust dwells a race of humanoid machines and in the strata dividing them, dreams of the dead conjure up phantoms of eras long lost to time. Traversing these forgotten realms, beast and machine cross paths, bringing upon both the threat of extinction.  But only one will make it through alive.

NarKarma EngineA takes the player into a world of beasts and mechanical mystery, fusing tabletop role playing gaming with the suspense and intrigue of Keika Hanada’s script and the striking illustrations of artist Kanemune

Far away in the city of Kazamatsuri, forestation and floriculture has caused the city to become panorama of trees, flowers and plants. In this maze of greens and flora, there is still modern civilization found deep within, one which has grown accustomed to this new normal, and found a balance between the modern cityscape and the nostalgic outdoors.

In this town, Kotarou Tennouji finds himself gifted with the ability to “rewrite” any part of his body to increase his strength and speed. Along with the occult society at his academy, Akane Senri , Kotori Kanbe, Chihaya Ohtori, Lucia Konohana and Sizuru Nakatsu, Tennouji finds himself drawn to the mysteries of Kazamatsuri and seeks out answers, friendship, love and conflict in an ever evolving world around him.

Following their collaboration on CLANNAD, Sekai Project and VisualArts are once again working on bringing one of their key visual novels to English-reading markets. Rewrite+ will be the complete edition of the visual novel. 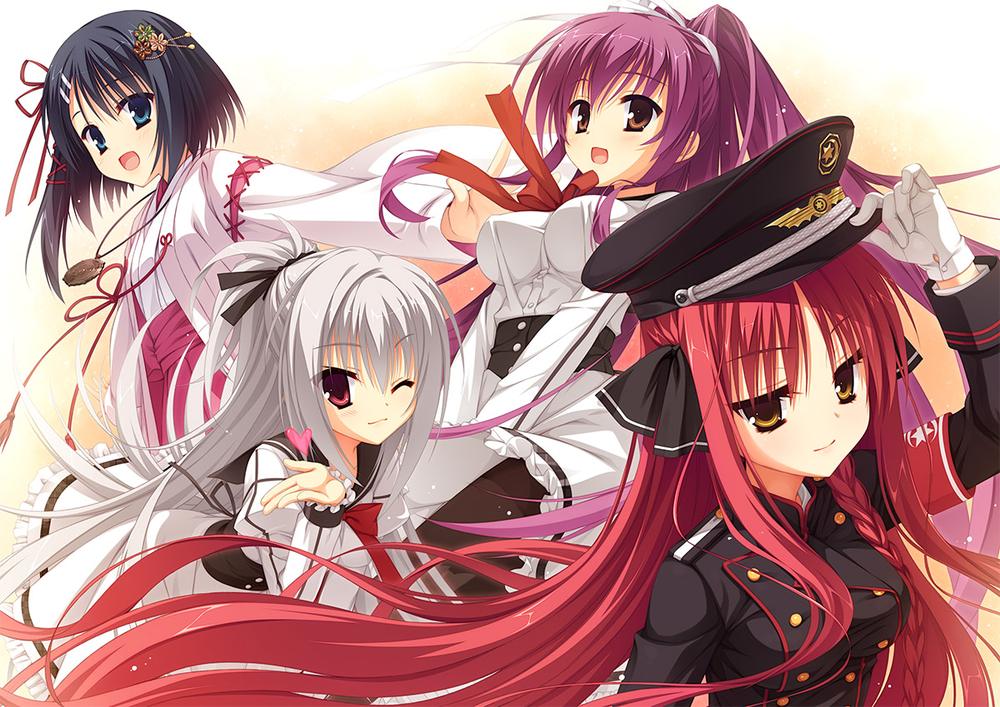 In a specially zoned part of Japan is the island city of Aqua Eden, a place where gambling and other underground activities were sanctioned.  On a mission to seek out romance in his life, Mutsura Yuuto accompanies his friend to this island to enjoy a nice vacation in Aqua Eden. These plans get disrupted as he witnesses a kidnapping!  Unable to simply turn a blind eye, he gets involved and somehow gets turned into a vampire!  Having been turned into a vampire, Yuuto is unable to leave and ends up having to live on the island … However, little did he know that this would only be the start of his story.

Yuuto ends up enrolling at the academy there where classes are taught in the dead of night and the contradictions to his common sense only create more confusion in him. 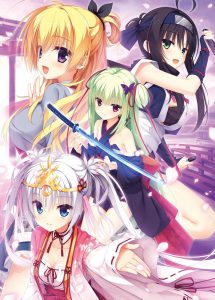 Deep in the mountain range, there exist a small village by the name Hoori. Secluded from civilization and unreachable by modern transport, the village can be interpreted as stuck far in the past. But it is this fact that has caused Hoori to become a hot spring paradise for the willing tourist. Among the springs and sights that enriches the rural town, a legendary katana is embedded in stone, spawning myths and legends for centuries; Murasamemaru. None have yet been able to wake the sword from its slumber and wield it as its new master.

That is, until Arichi Masaomi came along and broke the darn thing!

Not only that, but with this unforeseen set of events, the young man finds himself forced to take responsibility, responsibility in the form of marriage. His fiancé, a mysterious young woman, causes further chaos into Masaomi’s wife. With Murasamemaru in his hand, it seems that his life will never be the same again.

Ninja Girl and the Mysterious Army of Urban Legend Monsters ~Hunt of the Headless Horeseman~ by code:jp 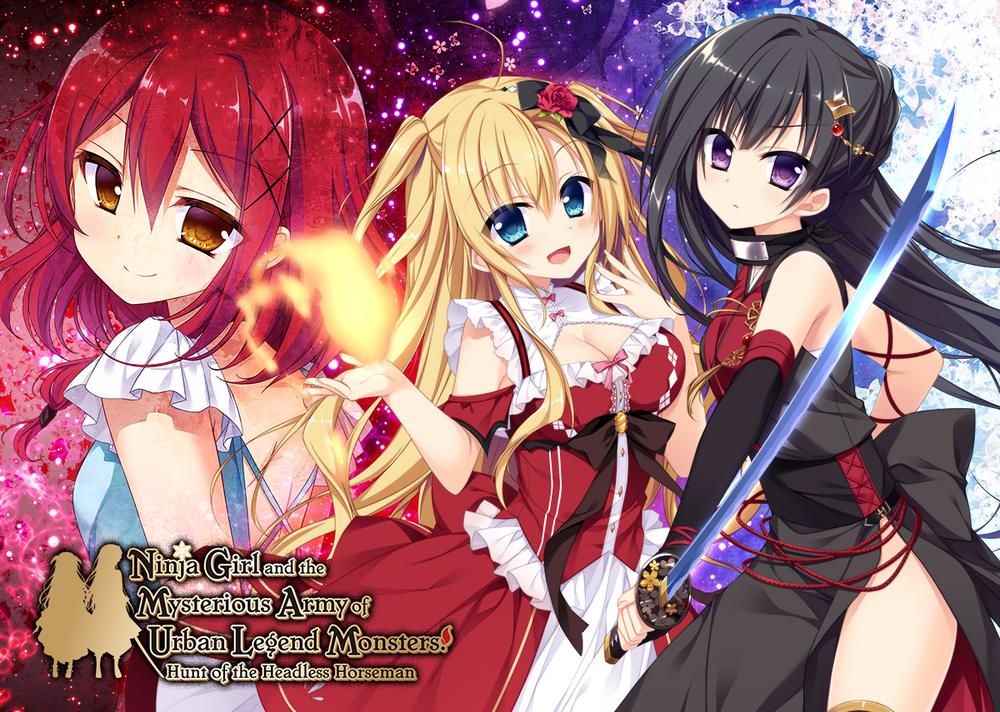 In present day America, Kiri Hattori and Mary run a little Japanese café in the heart of a city suburb. During the day, these beautiful girls lead a shy life of cookies and tea, but during the night, they become hunters donned in ninja apparel. It just so happens that Kiri is descendant from ninja royalty, and Mary, well, she is a ghost. It seems that this world is not so normal upon a closer look. In this world, Dark Beings inhabit the night and threaten the life and safety of those who comes close to their wrath.

On a peculiarly stormy night, the girls offer room and food to a mysterious little girl stranded in front of the café. As if this was not enough, the night unfolds more mysterious as the Headless Horseman strolls into town. While the 3 girls grow closer on each passing day, it seems that the mysterious little girl, Lily, brings more than just questions and confusion with her to the little café.

ETERNAL: Magical Girl with Delusion and a Church Fight by Mawari Works

“How do you save a world that has already ended?”

Father Thompson knows the answer. By the power of God, he builds a Church overnight. He saves them all. All but one:  Mario Chou is a homeless man who wishes to reclaim his childhood friend. Proclaiming himself as “The Light of Darkness,” Mario vows to destroy Thompson’s Guiding Light with the power of friendship.  The stalker. The occultist. The detective. The blessed one. These maidens of the real shall become magical girls!

Nanairo Reincarnation by Sily’s Plus Alpha 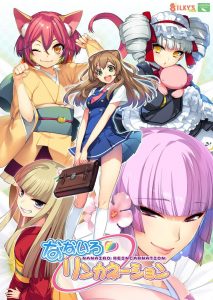 The summer heat is burning, as Kagami Makoto makes his way through his 3rd of college. While preoccupied with his studies, Kagami inherits his late grandfather’s house and makes the decision to live on his own given the circumstances. However, he is soon to discover that there lives a pair of young women in this house, Iyo and Kikyou, neither of whom cast a reflection and neither seems to be even visible to anyone but Kagami! This is actually due to Kagami possessing a skill known as reisha, an astral vision allowing him to see young girls who claim to be spirits. It turns out that Kagami did not inherit just a house, he also inherited a duty, a duty to serve and protect the many spirits that roam this town and guide them peacefully into their eternal sleep.

Inheriting a generations old duty, Kagami must make peace with this newfound responsibility an figure out his life, as he takes on the honor of the Kagami family lineage. But before he can get settled and come to terms with this revelation, an incident occurs that rocks the little spirit town to its core. 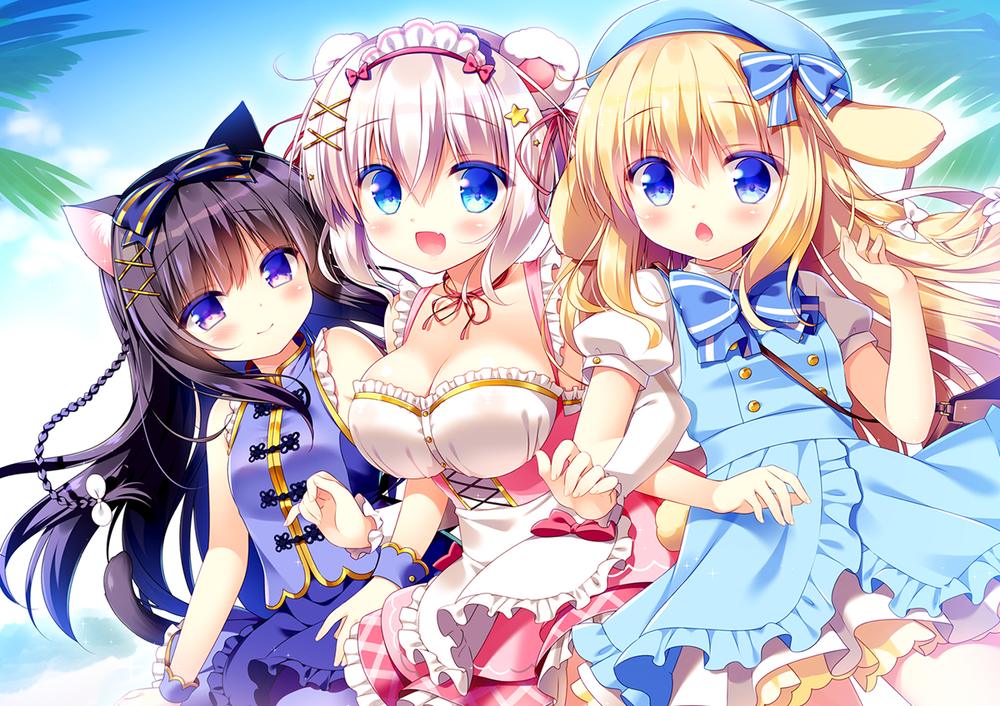 On an isolate island, a distant tropical wonder serves as home to the bear eared girl Momo. Despite the beautiful scenery in this seemingly idyllic paradise, she still experiences a sense of loneliness, as her only friends on this island are the cat eared Kuro and the rabbit eared Moka, however they have slowly been drifting apart from one another due to the existence of a certain diary. But one day, a young man wash ashore, unable to recall any detail of his past beyond his name thanks to a few of his belongings being with him. Momo discovers Ryou in his daze as he wakes up on the beach unable to grasp how he ended up in this strange little paradise, and with her help begins to shape together what is now to become his new life.

With the positive energy of Momo and the help of Ryou, the three girls and the lost young man find themselves building a new day on the solidary island together full of excitement and titillation.