Having recently emerged from Anime Expo 2016, international visual novel publisher MangaGamer has a lot of news to provide regarding progress on Supipara and new titles/partners in the works.

When MangaGamer released Minori’s visual novel eden*, it came with a particular goal. If they managed to make $100,000 in profit from the title, then those funds would go towards the localisation of Minori’s other visual novel Supipara. Some who follow Minori may recall that Supipara was a grand project for the studio, who sought to extend it over several chapters. Unfortunately it failed in the Japanese market and was discontinued. MangaGamer claimed in August 2014 that if both Eden* and Supipara: Chapter 1 were successful, it would help fuel further development of Supipara.

The $100,000 goal was reached, meaning that the first chapter of Supipara is in the process of being localised. It has been confirmed that this chapter will be available for pre-order later this month, with it to launch on July 29 2016.

The “crowdfunding” process for Chapters 2 to 5 are still underway, and can be followed HERE. Funds raised from both eden* and Supipara will go towards the development and release of these chapters. Success could also mean the very first English-first release of a Japanese visual novel.

With a major exhibition like Anime Expo 2016, it should come as no surprise that MangaGamer brought a number of announcements. In total they have confirmed five new acquisitions, three of which come from brand new partners. All of these are listed below:

If You Love Me, Then Say So!

Under the tree in the garden behind the school, I confessed my love to ‘Her’…

My up-to-then ordinary school life took a turn after a chance encounter with QP, a fairy that was born from an apple. I met Ayame, the air-headed rich girl, my relationship with my childhood friend Yuki has changed, and my ex-girlfriend Mahiru showed up in my life again.

One budding relationship blooms after the next, and then…

…After the longest seconds of my life pass, ‘She’ blushes as she responds.

What will her answer be? 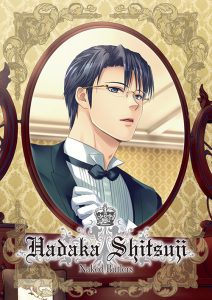 One day, our protagonist suddenly loses his job and when he’s at his wit’s end, he happens upon a mysterious flyer.

“30,000 yen a day.
A simple job that anyone can do! You can just sit around all day if you want. Interested parties, please come to the following address.”

Dubious, but without a lot of other options, he makes his way to the location where he finds a palatial estate with chalk-white walls and dazzling butlers.

According to the butlers, the owner of the estate is out of town and the butlers must continue to perform their duties even in his absence, so they are searching for a “master” to give them orders. The protagonist’s sadistic side begins to awaken as he continues to give them increasingly preposterous orders…

Ema Tachibana is a tall, gloomy and unsociable girl with a bad case of resting bitch-face. With all that working against her, she’s never really had any friends. That didn’t really change when she started at a new school. Everyone kept their distance because they were scared of her.

But Ema herself was quite content with that state of affairs. She was all set to spend the rest of her time until graduation invisible as ever.

That is until two men turned her life upside down…

“I’ve finally found you. You are my… my one and only muse!”

Miki Hiraizumi—recently returned to Japan from abroad, he’s loved making clothes ever since he was a little kid. He has a strong desire to help make charming, unusual women shine. (Also a bit of a masochist.)

“Listen, you may be nothing but a little shrew right now, but even you have some potential to shine. I’ll just have to polish you up.”

And Saito Shinjou—he frequently finds himself bored because things have always come easy to him. He wants to find a way to do something so big, it’ll change the world. (He’s also a bit of a sadist.)

These two ambitious and attractive fellows decide to give Ema Tachibana a makeover!

But Ema has other ideas. 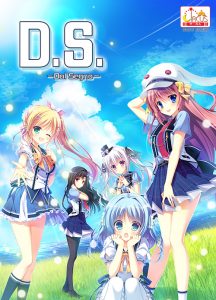 The protagonist finds himself stepping foot into this island paradise as a transfer student, greeted by a mysteriously glittering sky, as well as the energetic island caretaker Ame, a girl-type AI.

After a bit of a rocky start, he settles at the dorms where a handful of new female friendships await.

She’s a tomboyish beauty, but a bit of a loner: Himari Asamiya.

The manifestation of brains and beauty, and also student leader: Hazuki Murasaki.

The self-proclaimed “Daughter of Darkness”, with a normal side too: Io Kouzuki.

Always trying to act the grown-up, but still a tease (your cousin): Noeri Fujishiro.

And the girl who embraces her role of making everyone happy: Ame.

How will you sculpt your everlasting happiness here in paradise?

A new love is about to begin…

Formerly known as Kajou City, a central metropolis of the Kantou region, it was transformed overnight into a demonic city where the supernatural runs rampant after it was linked to the swirling power of chaos from the Abyss several years ago.

When immortal, unidentified beings called “Witches” began to appear, the government responded by quarantining the metropolitan area, and ceding the land from their sovereign borders.

Though old Kajou City became a ghost town for a time, criminals, illegal immigrants, and defaulting debtors who couldn’t make a living in this corrupt world sought refuge in the city, followed by an influx of prostitutes, black market dealers, and yakuza seeking to take advantage of them.

After growing to a population of 150,000 over several years, the curtain rises on this tale when a certain man encounters a lone “Witch” here in this unrecognized free city known as Pandemonium.

The wheel of destiny begins to turn for one man and the “Witches”, here in this dangerous, evil city beyond the reach of law.