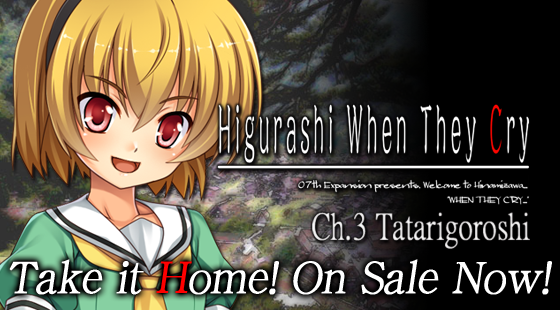 Back in 2014 it was announced by MangaGamer that they would be releasing a remake version of 07th Expansion’s murder-mystery visual novel, Higurashi no Naku Koro ni, chapter-by-chapter. Of the eight main chapters, two were released in 2015 – Onikakushi and Watanagashi. Although we are now almost half-way into 2016, the international VN publisher have confirmed that the third chapter, Higurashi: When They Cry Hou: Tatarigoroshi, is now available on Steam.

In this chapter, Tatarigoroshi (“Curse Killing”), the completely unexpected happens – Satoko’s father returns to Hinamizawa. What does this mean for little Satoko? What really happened in her family all those years ago before Satoshi went missing? Is Oyashiro-sama’s curse real, or just a convenient excuse to eliminate someone? Either way, you’ll have to find out the answers or die trying… when the higurashi cry.

Asides from a re-translated script, the biggest addition to the re-release of Higurashi no Naku Koro ni are character portraits. Although not using the same assets present in the PS2/PS3/PS Vita ports available exclusively in Japan, it does feature illustrations crafted by Kurosaki of Caramelbox. Of course, it also comes with the ability to switch between the new and classic art styles. This edition also features the ability to switch between English/Japanese text, and comes with the original BGM.

Priced at $7.95 USD, you can now purchase Higurashi When They Cry Ch.3 Tatarigoroshi via the official MangaGamer Online Store or through Steam.