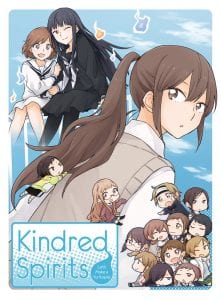 Visual novel publisher MangaGamer are not unfamiliar with Valve’s Steam service, having distributed many titles on it before. However, although MangaGamer have a sizable line-up of visual novels in their collection, they have only been able to release all-age friendly editions on Steam. Until now that is.

MangaGamer have announced that Kindred Spirits on the Roof, an acquisition they first confirmed at Otakon 2015, will be available on Steam. This upcoming Steam release will be uncensored, meaning that players will be able to enjoy the original storyline and CG artwork as it was meant to enjoyed.

Initially developed by Liar-soft under the Japanese title Okujou no Yurirei-san (屋上の百合霊さん), Kindred Spirits focuses on a lesbian relationship between two ghost girls who haunt an all-girls academy and the unrequited feelings in their hearts, unable to fully experience love during their lives. According to MangaGamer, the visual novel’s catchphrase is: “Let’s make this a Yuritopia!”.  Kindred Spirits on the Roof features some explicit sexual content, which will remain uncensored in the upcoming official Steam release.

Expect to see Kindred Spirits on the Roof available via Steam and the MangaGamer website in 2016. Time will tell if other visual novels will receive similar treatment.

We’ve always been proud of our work at MangaGamer.com and seeing the industry move in a socially progressive direction is motivating.

It’s great to see our years of effort finally paying off as visual novels containing adult content gain more mainstream acceptance and recognition as a valuable medium for artistic expression. This is monumental news for the industry as a whole. Everything will be open and up-front with this release; no off-site patch or workarounds. Kindred Spirits will be sold on Steam completely uncensored. Seeing frank depictions of same-sex relationships welcomed on such a major gaming platform is a true testament to the open-mindedness of our society and the growing desire for mature entertainment that people of all walks of life can enjoy.