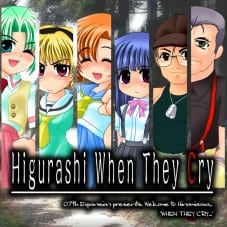 This Visual Novel summary has to do with my article on helping me decide what order to review a group of visual novel titles in. You can read the list of titles I have to review HERE. You can purchase the title from HERE.

Plot Summary
Welcome to the world of Higurashi When They Cry. Welcome to the village of Hinamizawa, the 58th year of Shouwa, June. You will enjoy your stay in this village through the eyes of the protagonist of the story. Maebara Keiichi has only just moved to Hinamizawa. The village is recovering from its battle against the dam’s construction, and now its number of residents is increasing as it welcomes newcomers. As a newcomer, Keiichi has no friends in this town, and so he feels lonely. But his classmates won’t just let him hang. Soon, Keiichi finds himself enjoying a cheerful existence in their company.

The protagonist of this story.
He is temperamental and hot blooded, but at the same time he’s also indecisive. He gets shy around girls easily… He is the sort of character you would find in the lead role of a love story.
As a matter of course, he’s not very honest about himself. And of course, he’s also quite popular with the girls.
Unfortunately this isn’t a love story, so his personality won’t do him much good. Quite the opposite, in fact…

Rena Ryugu
Rena is the main heroine of this story. She’s a classmate of Keiichi’s.
She is quite interested in his everyday life, possibly because of an inherent urge to look after people.
She comes with the standard-issue honesty, earnesty and blushes that you find in many heroines.
However, her only reward for taking care of Keiichi is an incessant series of pranks. It really is unfortunate for her.
She likes anything and everything she considers adorable, and this is also a very typical trait in a heroine.
But that is also her greatest weakness…

Mion Sonozaki
Mion is one grade higher than Keiichi. She is the class representative.
She is the active class representative type, which is the second most common type.
She is a leader, someone who makes friends with everyone, regardless of gender or age.
Because of her high-strung, easy-going, hyperactive personality, those around her never have to be bored. She is about the best kind of friend anyone could wish for.
Her personality is somewhat marred by a tendency to sound like an old man, but that’s something to be forgiven.
Mion likes games of all kinds, be they card games, board games or video games. Because of who she is, her games tend to be high-tension. It’s to be expected.
She plays with her friends in the context of club activity.

Satoko Houjou
A girl one grade lower than Keiichi.
She is usually very polite, but because she is still young she sometimes has difficulty with grammar.
However, behind her innocent exterior lies a personality that loves setting traps for other people. You could call her a trickster. She tries her utmost to snare Keiichi, but she has only limited success.
Although the result of failure is easily imaginable, Satoko doesn’t like to lose, and she doesn’t learn from experience. That is why she keeps confronting him, with all due consequences.
Even when she realizes her skills are insufficient, her smile never wavers.

Rika Furude
Rika is a grade lower than Keiichi, and thus is a classmate of Satoko’s.
She is very quiet and reserved for her age, which makes her almost the polar opposite of Satoko. However, the two of them can often be found in each other’s company.
Whenever Satoko is in tears after losing against Keiichi, it is Rika who cheers her up. When Satoko wins, Rika comforts Keiichi instead. When Keiichi teases Rena, Rika comforts her.
In fact, Rika comforts whomever is in need of comfort.
She seems happy with it.

The “Go-Getters Club,” a group of misfit students from all over Japan, find themselves trapped in a strange theme park during a class trip....
Read more
Visual Novels

Back in mid-December 2020, visual novel localiser and publisher Jast BLUE announced they would be bringing Nitro+Chiral's 2012 title DRAMAtical Murder to audiences outside...
Read more
Visual Novels