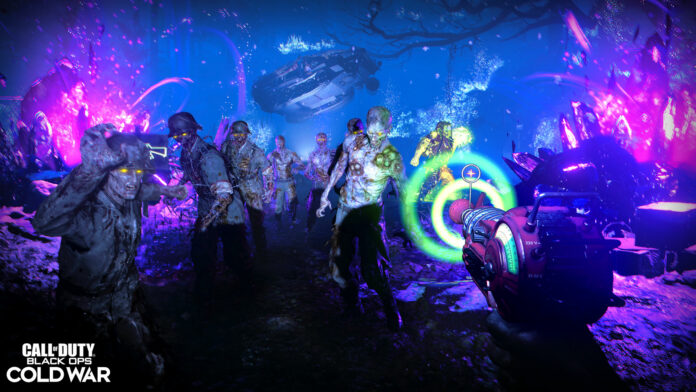 Question Time! What does the cold war and zombies have in common? Absolutely nothing? Well you Sir or Ma’am are wrong!

A staple, additional mode in many of the Call of Duty games since first being introduced in World at War, Call of Duty: Black Ops Cold War features a separate “alternate reality” narrative where players are tasked with fighting off hordes of zombies. This chapter takes place after uncovering the secrets of ‘Dark Aether’, with Requiem calling on all reinforcements to investigate anomalies related to this mysterious power source.

While the Zombie’s Mode is typically a standalone purchase, Treyarch and Activision has confirmed that from 15 January 2021 until 22 January 2021, all players will be able to access the Zombie content free-of-charge as part of an “Access Week”. Available through each platforms respective online stores, players will gain a weeks access to the following game modes:

Die Maschine
An abandoned WWII-era laboratory in Poland containing a massive particle collider has opened a rift to unexplainable monstrosities and animated undead forces. As part of the international response team known as Requiem, you’ll infiltrate the DZ and try to survive waves of zombies through multiple rounds as you either uncover the secrets of “Die Maschine,” or exfiltrate early with your life intact (and some great rewards to boot).

Cranked
As per usual, you and your squad will be airlifted in with a loadout of your choice. However, once the first zombie hits the floor, the Cranked Timer starts ticking away. Your Operator will explode if they fail to kill another zombie before the timer hits zero, and the timer gets shorter and shorter as the game progresses.

Onslaught (Exclusively available on PlayStation until 2 November 2021)
In this mode, your duo will use whatever is in your loadouts to fight against hyper-aggressive waves of undead forces. Unlike in traditional round-based Zombies, a Dark Aether Orb will confine you to a specific space on the map until it is charged by the souls of the undead.