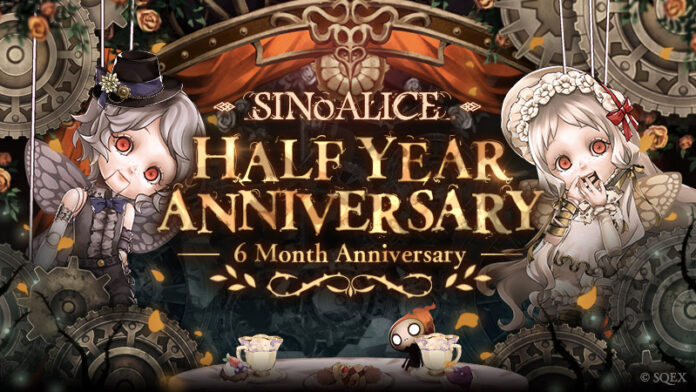 Six months ago, the mobile fantasy battle RPG SINoALICE launched on iOS and Android devices. This was a fairly interesting game at the time, co-developed by Square Enix and Pokelabo, and with a narrative from the mind of NiER franchise director Yoko Taro. To mark the six month anniversary, a series of events and a new character class are being rolled out onto the game. An overview of all new events and content can be found below:

As of now until 5 January 2021, a free daily x11 grimoire will be available as part of SINoALICE Global’s anniversary celebrations. Each time players summon from this grimoire, they’ll have a chance to enter a drawing for fantastic, real prizes.

Summon from the Free Grimoire x11 daily and tap Submit Entry to be entered into the drawing. Each day you summon, another entry will be submitted. Prizes include Bluetooth headphones and cutting-edge tablets. Results of the drawing will be announced at the end of the giveaway period.

These two characters will be featured in the STEP grimoire World Trajectory, where players are guaranteed one SR summon when they reach step 5. Each class is accompanied by a new character story expanding the lore of SINoALICE.

They will both be available as part of the STEP Grimoire World Trajectory from 31 December 2020 until 15 January 2021.

In celebration of the 6-month anniversary, returning players will benefit from double the login bonus rewards during the special Comeback Promotion.Players who qualify for this special promotion are those who haven’t logged into the game for 30 days or more.

I would like to mention that while SINoALICE is free to download, it is a “Gacha Game”. Therefore, if you are known to have issues with gambling or spending well over your limit on a whim, then I would strongly advise you to bypass this game and look for a console or PC game which has a flat-fee single-player and/or online mode. In particular, ones which require no “surprise mechanics”, “chance-based downloadable content”, or other industry terms for gacha in them.

On 28 January, World of Warcraft: Burning Crusade Classic will receive its Black Temple update, bringing the content from 2007 back for players both new and veteran alike to enjoy.
Previous articleDark Fantasy ‘Redo of Healer’ Licensed by Sentai
Next articleGo Just Go!
Twitter Youtube
© The Otaku's Study
Go to mobile version