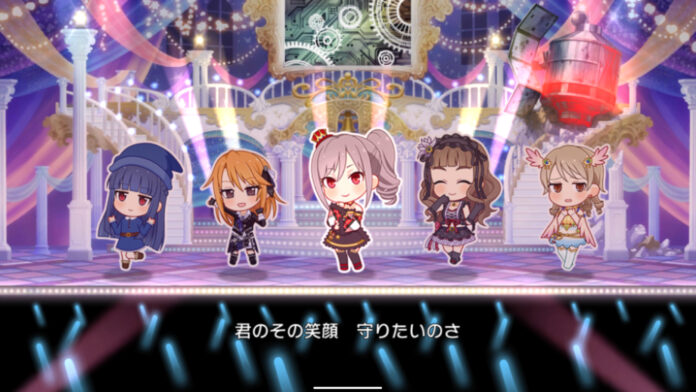 When it comes to visual novels, the science adventure series jointly developed by 5pb, Nitroplus and Chiyomaru Studio has many memorable tracks. This is especially true when it comes to their most iconic of works – Steins;Gate. The original theme song Sky Clad Observer is something I still listen to regularly while strolling around, and even the main anime themes Hacking to the Gate (Original Anime) and Fatima (0 Anime) warrant regular listening.

Earlier this month, CyGames and Bandai Namco Entertainment Games teased that their Japanese smart device rhythm game The [email protected] Cinderella Girls: Starlight Stage would receive a crossover event with Steins;Gate. This follows other recent crossovers involving the anime series Angel Beats! and Digimon, and CyGames’ other smartdevice game Granblue Fantasy among others. As of today, that event is now live.

This event brings two songs, cover tracks of the original visual novel and anime theme songs, in addition to a wealth of decorative items to decorate your office with. Both songs are only available with the 2D animation style with no custom stage, a shame given each would work really well with a fully 3D animated performance.

The cover of Sky Clad Observer is performed by Asuka Ninomiya (CV. Shiki Aoki) while Hacking to the Gate is performed by Ranko Kanzaki (CV. Maaya Uchida). It can be a bit surprising to hear different variants of the original songs, and I would not consider them as fitting as the original performances by Kanako Itō, but they are still fun to play through with solid vocals and a good beat tracks.

Let's be really frank here, pre-orders for the PlayStation 5 (PS5) were...
Read more

Following their current generation ports of Higurashi no Naku Koro ni onto the PlayStation 4 and Nintendo Switch, the Japanese development team at Entergram have been working on bringing 07th Expansion's Umineko no Naku Koro ni (Umineko: When They Cry) to the same platforms.
Read more

Gangs of Night City profiles some of the most notorious groups operating within and beyond the city walls whom players will be making deals with, fighting against, or both in order to survive.
Read more

Postcards from Night City is all about presenting never-before-seen locations and new personalities from the world of Cyberpunk 2077, along with extra slices of lore behind the most vivid and dangerous metropolis of the dark future.
Read more
Previous articleA Witch Chanting a Spell
Next articleBe Reincarnated as a Slime Once More With Latest Manga from Yen Press
Twitter Youtube
© The Otaku's Study