Back in May, Activision and developer Infinity Ward confirmed plans to release Call of Duty: Infinite Warfare on the PlayStation 4, Xbox One and Windows PC in November. One of the big differences in this instalments, compared to others in the long-running CoD franchise, is that it won’t be confined to the borders of Earth. Instead, the game’s first-person shooter combat will take place across our solar system – providing conflict in a variety of new locales and situations.

During the PlayStation Press Conference at E3 2016, Activision shared an eight minute “Ship Assault” gameplay trailer for Call of Duty: Infinite Warfare. It follows a mission which sees Reyes (The single player campaign’s main protagonist) and his crew infiltrate and take down an enemy SetDef destroyer.

Launching from the UNSA Retribution, the SCAR (Space Combat Air Recon) team finds themselves engaged in combat while experiencing zero-g. The combat sequence, which includes dogfighting and gunplay, can be viewed above. While time will tell just how the combat in Call of Duty: Infinite Warfare fares when in the hands of gamers, from this trailer along it does offer some very nice looking space combat. 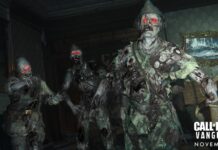