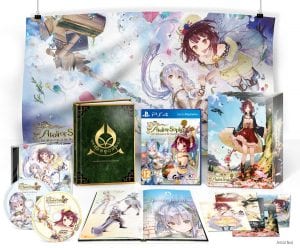 Do you reside in Europe, Australia or New Zealand and want to get your hands on a special Limited Edition copy of Atelier Sophie: The Alchemist of the Mysterious Book? Copies have been available through the Nippon Ichi Software America European Online Store for some time now, and is currently the official channel to purchase the edition.

As recently confirmed by Koei Tecmo Europe (@koeitecmoeurope), stock has reached less than 25% remaining. This is less than the North American store which still has stock levels somewhere between 26% and 50%. You might want to keep the stock levels on your radar if you are uncertain on whether or not to make the purchase.

Priced at £74.99 (Not including shipping), the Atelier Sophie limited edition collection includes

Developed by GUST and published by Koei Tecmo Europe, Atelier Sophie: The Alchemist of the Mysterious Book will officially launch on the PlayStation 4 starting June 10th 2016. A PlayStation Vita edition will also be available for purchase, exclusively through the digital PlayStation Store.