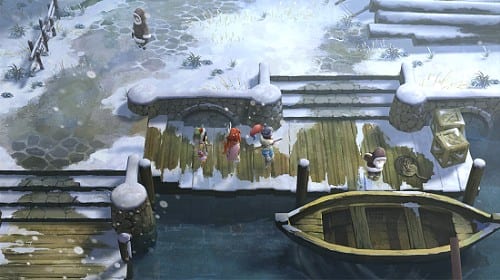 During the Game Developers Conference (GDC), Square Enix announced that their newest studio known as “Tokyo RPG Factory” are at work on the creation of their debut title. Known as ‘I Am Setsuna’, this game will receive a digital release later this year on both the PlayStation 4 and PC (via Steam) gaming platforms.

According to them, they are setting out to “revive classic RPG hallmarks” with this newest title. Led by director Atsushi Hashimoto, Tokyo RPG Factory aims to capture the narrative depth, impactful storytelling and masterful character development inspired by “the golden era” of Japanese role-playing games and bring these elements to current hardware and technology.

While we have yet to see too much about this title, I am Setsuna purportedly has a battle system which is inspired by Chrono Trigger, while also working to deliver authentic RPG gameplay, beautiful art design and a sorrowful story.