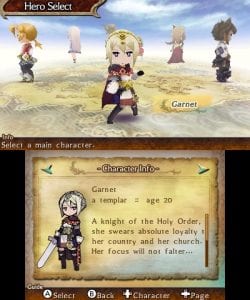 Providing gamers in PAL regions an opportunity to sample the game prior to its February 5 launch on the Nintendo 3DS, Nippon Ichi Software America have today confirmed that a The Legend of Legacy demo is now available to freely download via the Nintendo eShop.

This demo will provide you with an opportunity to sample some of the game’s various elements, with your progress transferable to the full release. If it is like the North American demo, it will provide access to the prologue and the first two dungeons.

Developed by FuRyu, The Legend of Legacy will be available on the Nintendo 3DS in PAL regions starting February 5th 2016. ATLUS USA is handling the JRPG in North America, having released it back in October 2015.

About The Legend of Legacy

In The Legend of Legacy, seven adventurers—Liber, Meurs, Owen, Bianca, Garnet, Eloise, and Filmia—arrive on the mysterious island of Avalon to pursue their own agenda as explorers. They team up with two of the other adventurers to achieve  their objectives—be it exploring the island for treasure, looking for the “god” on the island, or recovering  lost memories. But things change when they discover a singing stone that causes the party to see phantasms of Avalon’s forgotten history.